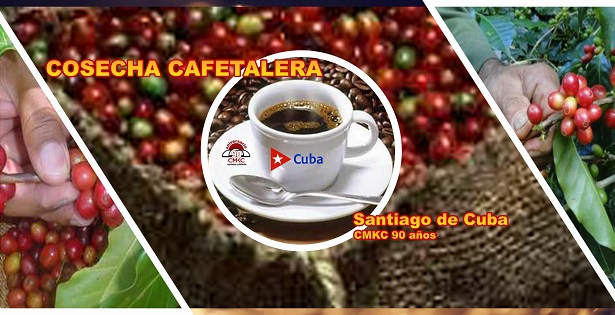 By: Luis Sánchez del Toro and Camilo González Guerra
At the 8 key areas from Santiago de Cuba, an active and popular participation is claimed to prevent the waste of the grain.

Rain mixed with high temperatures instigated an accelerated ripening of coffee in the main farming areas from Santiago that is the greatest producer of the country. This issue demands an active mobilization of people to go to plantations in order to avoid the waste of the grain.

Again, the main role of the current coffee harvest belongs to the regular collectors and their families, the members of the movement of high productivity, mobilized workforce from several institutions and organizations, as well as people from the area. Due to the fact of the sanitary measures for the current pandemic, the traditional participation of schools and their staff will not be possible.

Meibel Ramos Gómez, president of the committee of the National Association of Small Farmers (ANAP in Spanish) in the municipality of Tercer Frente, highlighted that over 3 120 farmers are integrated to the collecting of the Robusta Coffee variety in order to meet the 295 tons foreseen for this campaign, a number that stands for the 50 % of the total amount to collect in this area that is the greatest coffee producer of the country.

In the same way, measures are adopted in Segundo Frente municipality where over 20 000 Cuban-coffee-measurement collecting unit are foreseen in the field. This issue instigates daily staff mobilizations to prevent grain waste. In this way, staff of the movement of millenary collectors and several unions from the Cuban Workers Main Office (CTC in Spanish) stand out, as well as farmers and people from the area.

In San Luis municipality, other important farming area of the grain, labors are carried out in areas such as La Caoba and Sumidero where members of the Cuban Women federation and veterans, among others people form the area support the collecting process.

As foreseen, in the last months of the year and in accordance with the behavior of bloom -greater to the former campaign- the ripening peaks are estimated. This aspect is under evaluation for the municipal and provincial commissions of the coffee harvest, activated from past April and focused in the organization and execution of around 30 tasks targeted to achieve the greater efficiency possible in the labor.

The 2020 coffee harvest in Santiago de Cuba province shows an important stage in its evolution, from there the need to double efforts, mobilization capacity and devotion to this economic activity. This commitment demands the meeting of a figure of over 3 thousand 500 tons. This represents a significant growth of the exportable commodity.