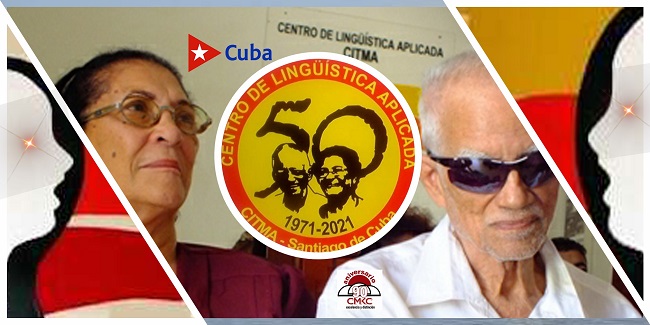 Text: Betty Beatón Ruíz
Photo: Santiago Romero Chang
Center of Applied Linguistics: The celebrations for the 50th anniversary of the foundation of the Center for Applied Linguistics, of Santiago de Cuba was announced at a press conference attended by its director, Dr. Leonel Ruiz and MSc. Zelma Celia, provincial delegate of the Ministry of Science, Technology and Environment (CITMA in Spanish) and workers of the institution.

The main celebration for this half century of contributions to the correct use of the Spanish language will be next January, from 20 to 22, during the development of the International Scientific Symposium traditionally held in Santiago de Cuba, which on this occasion, taking into account the scourge of the COVID-19 will be held in a physical and virtual way.

Tribute will be paid to Vitelio Ruiz Hernández, founder of the Center of Applied Linguistics with his wife Eloína Miyares Bermúdez, both Working Heroes of the Republic of Cuba.

Prior to the celebration, several commemorative actions will take place, among them the opening of a youtube channel of the Center of Applied Linguistics, a photographic exhibition that shows the work of the institution, as well as the presentation of a book that compiles its rich history in favor of language.

Dr. Leonel Ruiz Miyares, highlighted as the greatest contributions in these 50 years to the Phonetic Laboratories, the introduction in pedagogical schools of phonetics and phonology teaching, the application of scientific locution, the Val Cuba orthographic vaccine (from the active functional lexicon of Cuban schoolchildren) and the making of the School Illustrated and Basic School Dictionaries.

Among the current research projects of the Center of Applied Linguistics of Santiago are the corpus of Cuban Spanish, the fifth edition of the dictionary and poetic idiolect by Nicolas Guillen.

The Center of Applied Linguistics of Santiago de Cuba. It is a research center and generator of projects which has obtained scientific results of high linguistic-pedagogical impact in the whole country, mainly in the National System of Education.

It was recognized as one of the sponsoring centers of the Academy of Sciences of Cuba, in Santiago de Cuba. It was founded on January 1st, 1971 by Dr. Julio Vitelio Ruiz Hernández.

In 2000, with Resolution No. 86/2000 of the minister and due to the high scientific results achieved, the organization was constituted as Center of Applied Linguistics, subordinated to the Territorial Delegation of the Ministry of Science, Technology and Environment (CITMA) of Santiago de Cuba.

Their mission: To develop linguistic researches on Cuban Spanish and to provide services in this specialty. Its main mission is to contribute to raising the culture of the people’s language, especially school children, through applied research of high scientific rigor.

To carry out specialized and interdisciplinary studies on the mother tongue, which allow to know better its characteristics and tendencies, with the purpose of creating scientific tools that contribute to elevate the culture of the language and to the enrichment of spiritual and cultural values in the population.

The center has a scientific council, presided over by the director and to which a meritorious academic, a doctor in philological sciences, of the Academy of Sciences of Cuba belongs.

This council serves as an instrument of quality control of the results obtained in the researches. Its greatest achievement has been The Illustrated School Dictionary.

It was made on the basis of the research called Functional Active Lexicon of Cuban Schoolchildren (corpus of 700 000 words in 7000 compositions from all over Cuba).

It is aimed at familiarizing children from 2nd to 4th grades with the use of this necessary pedagogical tool, which is very important for the development of their lexicon. In the entries, the letters of potential mistakes appear in red to help, through visual perception, to the best fixation of correct orthographic patterns. It has about 2,000 entries whose definitions are simple and accessible to children.