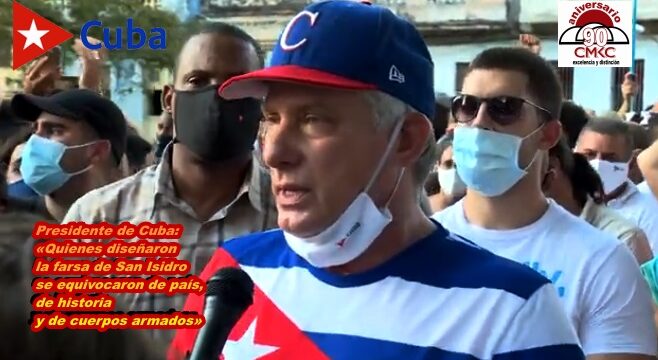 Defending their Revolution– Centro Habana’s Trillo Park was the scene of a passionate debate, a tángana, yesterday, where the dignity of the homeland was reaffirmed with condemnation of the most recent U.S. manipulations designed to discredit our country, energetically rejected by thousands of young people, along with the President of the Republic, Miguel Díaz-Canel Bermúdez.

This was a tángana in defense of their Revolution facing a new attack.

IDefending their Revolution– Intransigence, confidence in victory and the power of truth, the ideas of Martí, Fidel and Raúl, reigned in the park alongside the bronze statue of General Quintín Bandera, renowned for leading machete charges in Cuba’s wars of independence.

His firm determination seemed to portend another resounding defeat for U.S. imperialism, with the farce mounted by its paid mercenaries in San Isidro exposed and denounced, despite the distortion of events meant to destabilize and create chaos in socialist Cuba.

The arrival of the President surprised the crowd, and his emphatic words further raised spirits.

«The Cuban people are in the streets; we do not tolerate interference by our enemies. We solve our problems amongst ourselves.»

He reiterated that in Cuba there is room for dialogue on any subject for socialism, for the Revolution, which is the same as saying for our revolutionary, supportive and internationalist people.

And then the President added: «I’m going to make a request. Today is Silvio’s (Rodríguez) birthday. He composed a beautiful song, my favorite, called Pequeña serenata diurna. I would like to ask that we all sing it together, because today is one of those days when we must ask the dead to forgive our happiness, and our heroes, to forgive us for days like this.”

The crowd cheered and sang: «I live in a free country, which can only be free, on this earth and at this moment, and I am happy because I am giant…”

Also on hand in the park were sports legends Alberto Juantorena, Maria Caridad Colon and Ana Fidelia Quirot, enjoying the afternoon, the music and the rousing speeches by students and young workers reaffirming what the Cuban people are made of.

Alejandro Castro Cabrera, second year Physics student at the University of Havana, emphasized to Granma his rejection of maneuvers by the so-called San Isidro Movement, and the «need to articulate, organize and spread our message in favor of the Revolution.”

«The idea (of the tángana) emerged in a room, in a house in the municipality of Plaza de la Revolución. We began to call each other and to gather on social media, and in that process several youth organizations identified with our concerns, channeled our idea and gave us support.»

José Julián Díaz Pérez, a first-year Mathematics student at the University of Havana, expressed a similar view: «This was a good opportunity to bring young people together and express our ideas about defending the principles of the Revolution, in which we believe.

«We want to tell the world that our youth truly love the Revolution. Today our values, our principles and our confidence in socialism have brought us together.”