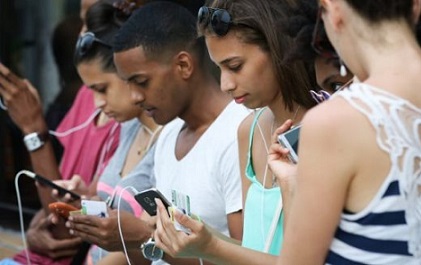 Internet- The number of residents in Cuba connected to the Internet grew to 7.7 million in 2021, 68 percent of the population, according to reports by We Are Social and Hootsuite.

Internet– Those sites, which specialize in trends, digital statistics and social networks, inform that over 600,000 Cubans went online for the first time in 2020, and the Internet penetration rate (percent of people connected) was 63.

‘For the second year in a row the country maintains this parameter higher than the world average of 59.5 percent in the first two months of 2021,’ We Are Social and Hootsuite analyses point out.

The first joint report by both sites on Cuba recalls how the country in 2011 reached only 16 percent of the population surfing the web and the world statistic was 30 percent.

Data from Cuba’s Ministry of Communications refer that currently of the 7.7 million Cubans connected by different means, 4.2 million do so through mobile data.

Figures from the Telecommunications Company note that data traffic in 2020 almost doubled the total of 2019, by growing 1.9 times.