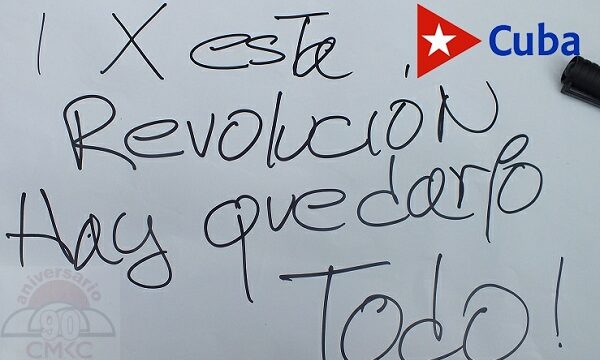 Dialogue– They should know this. The manuals prescribing devious «soft» coups are not recommended in Cuba; the people quickly intuit false gestures and detest traitors.

Dialogue– The Trump administration took aggression to such an extreme in 2019 that President Miguel Díaz-Canel, when bidding farewell to the year, said:

Díaz-Canel: Our culture is the essence of the Revolution

Dialogue– «They threw us to our death, and we are alive.» But in 2020 the pandemic was added to the blockade, further tightened. While the Revolution invested its scarce resources in prevention, medical care for citizens and the research-production of medicines, with highly satisfactory results, guaranteed the vitality of the country, and sent medical brigades to more than 40 nations, some rich and some poor, as an expression of an essential, unrenounceable solidarity, the blockade was intensified in a criminal manner. Young Cubans were the protagonists on all fronts.

The simulation failed
Simulation is a basic strategy employed by mercenaries attempting to subvert the social order chosen by the majority of Cubans, but the latest attempt failed miserably

Dialogue– There were no miracles and yet it seemed so: Cuba resisted and showed the world its humanism. «We are the country that has insisted on resisting and overcoming the most cruel and perverse sieges and attacks. And here we are: living, resisting, creating and winning,» Díaz-Canel stated in December of 2020.

The most recent actions of the counterrevolution were meant to capitalize on the economic effects of the blockade and the pandemic, and create obstacles to any move by the new U.S. administration to change policy, resuming a path of dialogue with the Cuban government. Such a pretense reveals the wretched character of its promoters. Enough has already been said about the San Isidro farce:

«Mercenary attitudes regarding fake hunger strikes by alleged artists seeking to attract public opinion and the intelligentsia, to impose a dialogue camouflaged with the sector’s genuine concerns,» our President explained in a few words.

Their actions are not directed against a specific institution; their demands are not cultural or professional, but rather political; the target is not the Ministry of Culture or any other institution, it is the Revolution.

They cynically manipulate the word dialogue on spurious bases. The demands are abstract and, in practice, dismiss the existence of a socialist state of law, overwhelmingly supported by the people; the attitude is provocative and aspires more to media exposure than to recognition of those with whom they pretend to dialogue; they are tied to text book instructions and decisions by «experts» on soft and hard coups, and the demand, the real one, is the abandonment of the Revolution. Thus there are no grounds for dialogue and there will be no dialogue. We do not understand each other.

The Revolution does not negotiate its existence. They know this very well and the maneuver is cynical: Dialogue devoid of any content, to blame us for its non-existence. Thisis why when, in spite of everything, the Revolution patiently invites them to talk, they are disconcerted, and resort to a media performance, to institutional harassment.

The Revolution works hard to personalize those who demand attention from its institutions. It knows that the contamination of objectives, language and people is notorious, promoted for years on media platforms seeking restoration of the neocolonial republic, via scholarships, generous remuneration, and in the fake glitter of metropolitan notoriety.

The Revolution knows that there are small-minded leaders well paid by imperialism – be they artists or not: no profession values mercenaries – and that, perhaps, some of those involved have honest intentions.

But naivety and ignorance have their limits: would honest men and women accept being represented by paid provocateurs who shout before the camera that they are being threatened, when they know this is a lie? The counterrevolution is not interested in the truth; it only aspires to taking power.

The script of the so-called «soft coup» is neither peaceful or soft. Would you agree to be represented by «deserters who request a rifle in North American armies,» as José Martí would say? It is to be expected that the people’s response would not be soft.

The Revolution is dialogue. First it made sure everyone was literate, and opened the doors of knowledge to the majority, regardless of origin, place of residence or skin color. Dialogue exists in plazas, in schools, in workers’ assemblies, in congresses, in debates on the Policy Guidelines and the Constitution. New forms of debate, of citizen participation, emerge on social networks.

A government that readjusts its own decisions and laws, if they are found to be inappropriate or unjust, one that meets with scientists and intellectuals to think and find solutions together, is a government that dialogues, that listens. Revolutionaries are interested in the truth, we need it, because it is the only path to justice. The war they wage against us is not a war of thought. They mutilate thinking, trivialize it, fear it, but we need the truth to win.

If anyone believes that when the historic generation steps aside in April, during the 8th Party Congress, the unity of Cuban revolutionaries will be broken, they have no confidence in the people. Because we have Martí and Fidel as references, and their people – especially youth – who have assumed this legacy saying: «I am Fidel,» we can reach the highest summits, make possible what seems impossible.

The old pines will always accompany us. «Those who have no confidence in their land are stillborn men,» wrote José Martí, “because they lack courage, they deny it to others. Their feeble arms cannot reach the difficult tree, arms with painted nails and bracelets, the arms of Madrid or Paris, and they say the tree cannot be reached.»

Twenty young Cubans symbolically held the torch on January 27, as they walked the streets that separate the university’s stairway from the Fragua Martiana.

The tribute could not be massive this year. The representatives of the Centennial generation were waiting for them: Raul, Ramiro, Machado Ventura, Balaguer. With them, President Miguel Diaz-Canel. Raul then stated,