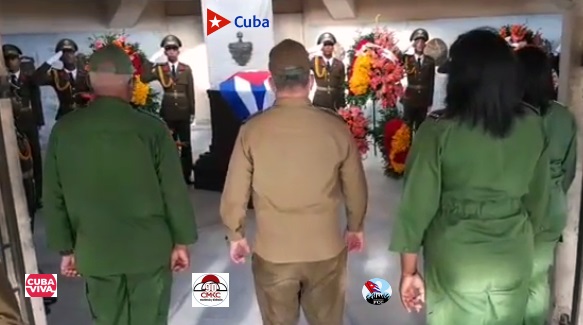 Photo and videos: Santiago Romero Chang
Independence Struggle– On the 126th anniversary of the re-launching of Cuba’s war of independence, flowers from Raúl and Díaz-Canel were placed alongside the tomb where the remains of Cuba’s national hero rest.

Independence Struggle– February 24 of 1895 was once again celebrated yesterday, the date the Necessary War summoned by José Martí was launched, with all and for the good of all, with a shouts of Homeland or Death resounding alongside the mausoleum where the remains of Cuba’s national hero rest.

Independence Struggle– With this refrain ended the tribute that included the delivery of floral wreaths on behalf of the first secretary of the Party Central Committee, Army General Raul Castro Ruz, and President of the Republic, Miguel Diaz-Canel Bermudez, placed next to the tomb covered by a Cuban flag.

Earlier in the day, Diaz-Canel tweeted: «It is February 24, a day to retell and sing history. Martí said, “By loving past glories we draw strength to win new glories.» Homeland or Death, beloved Cuba. Only those who cast aside your light and essences can deny the honorable sacrifice of devoting their lives to you. What an honor to serve you in difficult times!”

Independence Struggle– Flowers on behalf of the president of the National Assembly of People’s Power, Esteban Lazo Hernandez, and the people of Cuba, were also placed alongside the monument graves of Fidel, Cespedes and Mariana, in Santiago de Cuba’s patrimonial Santa Ifigenia Cemetery, where a representative group of the city’s citizens, with fists raised, shouted Homeland or Death, reaffirming the determination of Cubans to defend our homeland against aggressive mercenaries of all stripes.

A commemoration of the resumption of the independence struggle also took place in Baire, in the municipality of Contramaestre, the site of one of the more than 30 coordinated uprisings which took place that day to challenge the Spanish colonial yoke.

Another important commemoration took place at the University of Havana, on the occasion of the 65th anniversary of the public emergence of the Revolutionary Directorate, led by student leader José Antonio Echeverría, in the Aula Magna, where the insurrectional organization of Cuban students was born.

February 24, 2021, culminated with multiple cultural initiatives – in appropriate small group events and via social networks – honoring Martí, Cuba´s independence struggle, and the defense of the homeland through theater, song, poetry, exhibitions, and music.

February 24 is at hand, lest we forget

Deceptive stagings, disguised patriotism, false promises, threats… What insolence, my land! They have tried everything to divide us. And you – firm, self-respectful, beautiful and determined – persevere immune to such melodramatic pantomimes.

Venerable, homeland; this is your position in the face of a den of bosses and paid chameleons, who from their obsolete factory of pretexts insist on playing Zanjón and Fernandina, ignoring that another February 24 is at hand – it always is – and that our algorithms are different: Baire and La Confianza unite and multiply as Girón, Baraguá and Cinco Palmas did.

But they insist, sick with hatred and spite. The financiers are obsessed with the impossible: erasing us from the map and from the world’s memory; while the lackeys cannot control their desperate need to slit a vein for their sponsors, in exchange for fame, comfort and money.

They know that we prefer to live in austerity, clinging to the construction of our work, despite the hurricane winds from the North, with a foundation of love, sweat, and even pain. To live without it would be to renounce freedom, and we are not willing to do so. «He who loves assumes its pains, and is not detained by the sun or its opposite.»

They think we are weak, they attack, and again they fail. They try another formula, one more «respectful» of our symbols, but they profane them. They attempt to sell vulgarity as art, to disguise their vendetta with dignity, in a desperate refrain.

They want to strip music of its values, to use it against us. And in this sordid attempt they dare to invoke our loyal, cultured José Julián, so exalted, so Cuban and so sensitive, so alien to offenses and rudeness, so committed to unity and the necessary war for the independence of Cuba. February 24 is at hand, lest we forget.