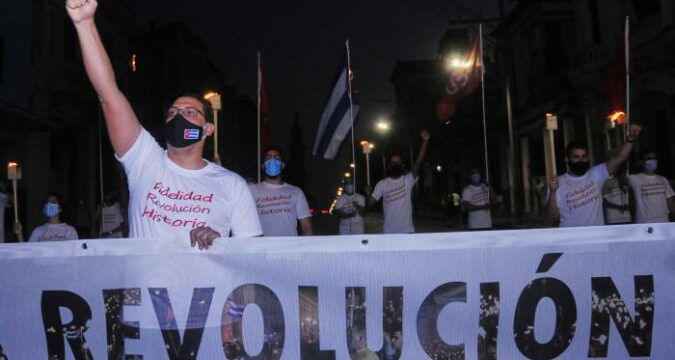 Simulation is the basic strategy employed by some figures intent upon subverting the social order chosen and supported by the majority of Cubans, of our own free will, camouflaging their political intentions with artistic concerns; faking interest in dialogue when the real goal is the imposition of an intransigent monologue; and proclaiming independent, spontaneous attitudes, behind which the promotion of a servile, submissive project is easily discovered.

Simulation- Among those fitting this profile are several highly visible faces and audible voices participating in the reality show produced January 27 outside the Ministry of Culture. If they were seriously interested in addressing artistic or cultural problems, and the functioning of this institution, why did they refuse the opportunity?

In this recent period, I have witnessed complicated, difficult, heated debates among artists, intellectuals and cultural promoters, during which, on more than one occasion, disagreements and divergent opinions emerged.

I have attended artistic performances characterized by critical assertions, even highly critical, related to our national reality, and can testify to the fact that via constructive interaction, and analysis that is not exempt from passion, concerns and legitimate disagreements have been addressed.

But this was not the case during the January 27 events, as I observed in the manipulators participating, fishing in muddy waters. The confrontational tone was set well beforehand and the audience that needed to witness the spectacle had been previously arranged.

After the planned performance came the summoning of the triangulated media financed by U.S. agencies and institutions; live broadcasts from the site of the events via social networks; the media harassment of the Minister and other authorities; the violation of the right to privacy in communications between the provocateurs and the representatives they targeted.

All this to create an artificial atmosphere of chaos, intolerance and ungovernability, reproduced by the enemy media in collusion. They had even prepared a sort of international panel discussion, offering analysis ready to be consumed, more like a junk food buffet, more from abroad than Cuban, to be used on international platforms.

Silvio Rodríguez unambiguously exposed the falsity of the episode: “I have tried to view the mentioned video of Culture functionaries attacking the artists, but have not been able to do so.

I saw one in which the deputy minister Fernando Rojas invites them several times to enter the ministry; then something very confusing occurs, some shouting, and there is a young man saying there are police with pistols present (which cannot be seen either).

On two of the opposition’s web sites, to see the video, they request that you approve the cookies. If they are so interested in disseminating the supposed injustice, they should facilitate the process, right?”

The simulation failed. Using culture, one of our greatest strengths, it will be impossible to upset the table of the political system we have freely adopted.