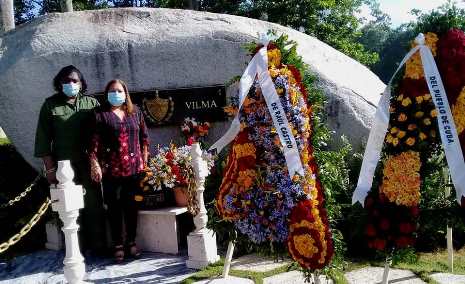 A symbol of the struggles of Cuban women for their full emancipation, heroine of the underground and guerrilla struggle.

Vilma, the Example of an Emancipated Woman

Cuba- Vilma Espín Guillois, was honored, this March 8, before the monumental boulder where her ashes rest, in the mausoleum to the heroes and martyrs of the Frank País Second Front.

Cuba- A bouquet of white roses and lilies, placed very close, and a floral wreath at the foot of the memorial, arrived to pay tribute to the extraordinary Santiago native, whose determination, sensitivity and love for the family, and especially for children, won her admiration in Cuba and abroad.

Cuba- Leyanis Riquelmes Batista and Yudith Aguilar Valverde, president and vice-president of the Municipal Defense Council, led the commemoration and the subsequent meeting of women living in these historic mountains, who relcalled anecdotes about the legendary revolutionary fighter.

On a proud date for Cuban women, a representative group of women from Santiago also honored Mariana Grajales Cuello, Mother of the Homeland and of the legendary Maceo brothers, placing flowers, on behalf of the country’s women alongside the tomb that holds her remains in Santiago de Cuba’s patrimonial Santa Ifigenia Cemetery.

In the case of Cuba, education is one of its key pillars, as well as a vital commitment of the State to its society. and this precept is fulfilled because there is close coordination between the policies and strategies implemented by the country to ensure the educational development and economic and social progress it requires.

This is favored by a strong engagement of society at large and the awareness that education is a task in which everyone participates in one way or another, and therefore should also be the responsibility of all, although it falls on the Ministry of Education the state duty of managing, guiding and controlling education at all levels.

This declaration of principles on the importance of education would not be enough without the endorsement of legal support.

Thus, the Constitution of the Republic of Cuba establishes in several articles the fundamental principles and objectives of education, according to which the “Socialist State, as the power of the people […] shall ensure […] that no child be left estudos avançados without schooling, food and clothing; that no young person be left without the opportunity to study; that no one be left without access to the studies, culture and sports…”, while “guiding, fostering and promoting education, culture and science in all their manifestations”.

Therefore, besides an elementary duty of humanity and social justice, edu-cation for Cuba is also an imperative of the present time and the safety of its fu-ture in the preparation of new generations, so as to ensure the continuity of the revolutionary work undertaken more than half a century ago.

Hence the main goal of the Cuban effort to pursue the continuous improvement of education, with a view to fully meeting its objectives, which today leads to the implementation of major transformations without schooling, food and clothing; that no young person be left without the opportunity to study; that no one be left without access to the studies, culture and sports…”, while “guiding, fostering and promoting education, culture and science in all their manifestations”.

It would be impossible to objectively recognize the value of the present state of Cuban education, its major achievements and transformations without a comparative analysis of the current situation with that which existed before the Revolution.

If education is a right guaranteed by State guaran-tees to its people as a just aspiration of society, the government has to guarantee massive education to enable the access of all children, youth and adults to the System, which means that it should be comprehensive in all types and at all levels of education, without regard to age, gender, ethnic or religious differences.Study-work combination.

It is a guiding principle of Cuban pedagogy that merges two essential goals. on the one hand, to develop in students the love for work as a fundamental value of a society of workers such as ours, to create in them the awareness of producers of social and material wealth; and on the other, to integrate the student in the productive process and socially useful work in a participatory and balanced way, so to promote in them, from early on, values as essential as responsibility and industriousness.

Both goals are focused on the school, on the vocational training process that takes place inside and outside the classroom, by which students share, through work, the rules of conduct and values related to the development of their consciousness as producers that will enable them to internalize the culture of work as education of the individual in its broadest sense.

The application of this principle is present in all the Educational System adjusted to the characteristics of each educational subsystem and to the social needs of development itself. Its roots lie in Martí’s conceptions and in the most advanced contemporary pedagogical ideas.