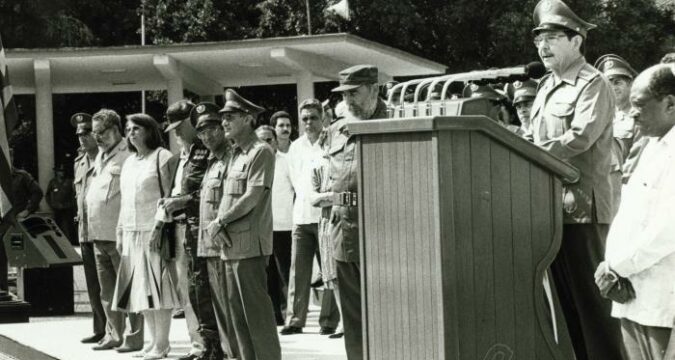 Thirty years after the return from Angola of Cuba’s last internationalists there, the more I am convinced that, beyond the military victory, the victory over South Africa and its allies was a profoundly human triumph

Thirty years after the return from Angola of Cuba’s internationalists, the more I am convinced that, beyond the military victory, the victory over South Africa and its allies was a profoundly human triumph.

Thousands of witnesses and participants could write entire books and spend hours reliving the transcendental moments they experienced over 15 years of combat and effort, displaying true altruism in Quifangondo, Cabinda, Ebo, Sumbe, Cangamba, Cuito Cuanavale, Calueque, hundreds of supply caravans and other works in which more than 370,000 Cubans participated directly or indirectly.

Not a single one was obliged to go, and none did so in search of personal glory, money, fortune, or rewards.

It was the response of an entire country to the request for help made by President Agosthino Neto to Comandante en Jefe Fidel Castro (1975), in confronting the designs of foreign powers and the internal counterrevolution, to take Luanda and prevent the independence of Angola agreed upon in Alvor.

The Cuban solidarity operation was named Carlota, in honor of the African slave who in 1843 led a revolt against Spanish oppression at the Triunvirato sugar cane plantation in Matanzas.

Experts and researchers have written volumes about Cuba’s military and political contribution to the destiny of Angola (sovereignty) and the continent (ending apartheid in South Africa and securing implementation of UN Resolution 435/78 for the independence of Namibia), and more could be written.

Much remains to be said about the human mark left on every inch of the land defended:

The Cuban doctor intent on saving a baby in the arms of an Angolan woman.

The gratitude of the child who, at the age of five, was found dying, without family, to whom our men gave shelter, a name (Alberto Manuel Gomez) and protection, raising him to become a magnificent young man.

The breath of life in every playground that Cuban hands built for barefoot children.

The Angolan soldiers in Ruacaná who learned to read and write thanks to Sergeant Alfredo Plascencia.

And this human mark is Raul in El Cacahual, two days after the last combatant returned, affirming in a firm voice what the Cuban people, «the true protagonists of the epic» showed, in a colossal demonstration of how much a small and united country can do, when moved by a just cause: «To our people and to you, Comandante en Jefe, I report: Operation Carlota has concluded!