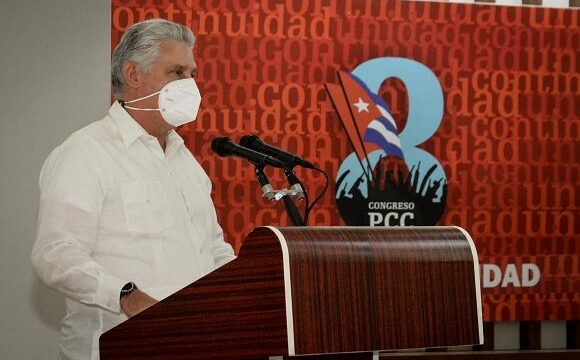 Sovereignty- Party work to support meeting objectives that are key to the country’s future was the focus of discussion during working meetings held in Ciego de Avila and Camagüey, chaired by Miguel Diaz-Canel Bermudez, first secretary of the Communist Party of Cuba Central Committee and President of the Republic.

The goals addressed iincluded making progress on strategic programs, including monetary re-ordering, confronting COVID-19, consolidating unity within the party ranks, and developing a systematic approach to the public agenda in the media and knowledge of history,

In a detailed analysis, the President noted opinions expressed on social networks urging Cuban authorities to sit down with the United States and put an end to differences.

He went on to say: «This is a totally unilateral relationship. It is the U.S. government that has taken measures against Cuba.

We have not applied any measure whatsoever against that country. If one thing is clear, it is that we will always defend sovereignty, self-determination and independence, these are not on any negotiating table.

«Who needs to take a step forward is the government of the United States, which unilaterally imposed the blockade and has internationalized it, with financial persecution and economic asphyxiation,» he said.

At another point, he commented that monetary re-ordering is being blamed for things that were going to happen with or without this reorganization, and that shortages are a result of the blockade, more than anything else, and shortages bring inflation.

Prices were going to go up anyway, he stated, because supply is below demand, while criticizing abusive and speculative prices, saying «We must confront them effectively at the local level, in provinces, in municipalities, independently of measures that can be taken at the national level.»

Lianet Pazo Cedeño, first secretary of the Young Communist League in the territory, reported that members are strengthening political-ideological work, and noted the role of young people in the sugar harvest, in the fight against COVID-19 and food production.

In Camagüey, as in the other seven provinces visited thus far by members of the Secretariat in this round, evaluated was work being done in the territory to strengthen the role of the party in leading transformations taking place in the economic, political and social framework of the country.

In this regard, Daniel Fuentes Milanés, first secretary of the Party Municipal Committee in Camagüey, explained how the preparation of local unit leaders is conceived here.

Provincial coordinator of the Committees for the Defense of the Revolution, Iska Torres Creach, and Yodelkis Fajardo Orihuela, general secretary of the Federation of Cuban Women, described creative efforts being undertaken to revitalize the work of the two organizations.

Dr. Roberto Morales Ojeda, Party Political Bureau member and secretary for Organization and Cadre Policy, commented on experiences in Camagüey and reiterated the call for mass organizations to assume leadership of community activities, conscious that things can no longer be done in the same way to consolidate an atmosphere of unity and collective contributions to the solution of problems.

A similar spirit must prevail when facing the multiple challenges in the economic sphere, as outlined by Ariel Santana Santiesteban, first secretary of the Party Provincial Committee.

Among the main Party objectives in the territory are increasing agricultural production, the recovery of livestock ranching and sugar cane cultivation, tourist development on the northern keys, completing plans for housing construction, timely completion of investment projects and promotion of new exportable items.

«Nothing is alien to the Revolution and its Party,» Díaz-Canel repeated, summarizing the discussion, and reiterated that only with the unity and will of all revolutionaries and patriots, can we meet the challenges and emerge victorious in the midst of such complex circumstances.