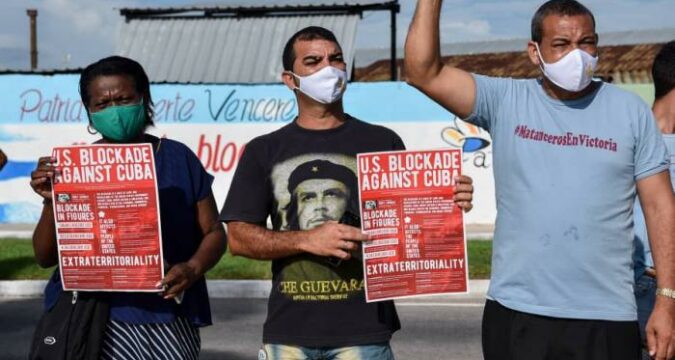 We are alive- For the twenty-ninth time, the UN condemns the U.S. blockade of Cuba, with 184 nations supporting the resolution calling for an end to the criminal policy, two against and three abstaining

They threw us to our death, but we are alive. Díaz-Canel has said it and we know it, the many, many, millions of us, who day after day overcome the enormous difficulties that stand between what is possible and what is real, in a besieged, harassed, attacked country.

They threw us to our death, denying us access to a total of 32 pieces of equipment and supplies needed for the production of our COVID-19 candidate vaccines and the execution of different stages in the clinical trials process, including equipment for the purification of the candidates, attachments for production machinery, filtration tanks and capsules, potassium chloride solution, thimerosal, packaging and reagents.

As if this were not enough, they work hard to get us to kill ourselves, to leave us discouraged, irritated, and desperate. Looking to provoke an explosion.

As none of this has happened, the trending lie is that we are afraid to rebel. A hysterical youtuber and (coincidentally?) an academic, who I cannot respect or take seriously, based on hasty and incomplete readings, attempts to sell the idea that here we live in an Orwellian atmosphere, in an oppressive country.

But we are alive. With candidate vaccines that have proven to be effective, benefiting Cubans, without distinction of any kind. Alive and very well accompanied in the battle against the blockade.

Cuba stands tall, alive, unafraid and outspoken, from one end of the island to the other. Defending our dignity, what we are and what we will never renounce being.

Upon learning of the vote at the United Nations, Communist Party of Cuba First Secretary and President of the Republic, Miguel Díaz-Canel Bermúdez, tweeted: This is how the world reacts to Cuba’s demand. It’s now been 28 years of worldwide rejection of the blockade. The blockaders have run out of arguments. Those in solidarity strengthen support.

By consensus, the world community approved the Cuban resolution entitled “The necessity of ending the economic, commercial and financial blockade imposed by the United States of America against Cuba.”

The accumulated damages caused to our country by the blockade, over almost six decades, have reached 147,853,300,000 dollars, at current prices, and taking into account the depreciation of the dollar as compared to gold on the international market, quantifiable damages are equivalent to more than 1,377,998,000,000 dollars.

The blockade asphyxiates and kills, just like the virus, and must end!