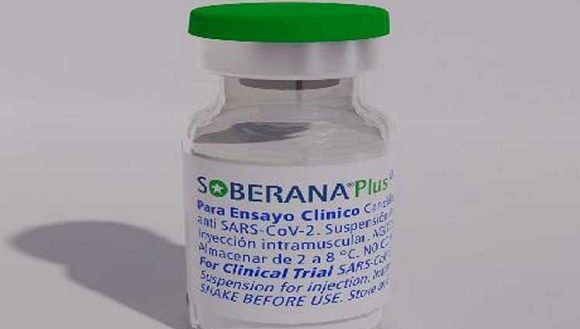 The Chinese vaccine Sinopharm is being administered in Cienfuegos, In combination with a dose of Cuba’s Soberana Plus, to maximize effectiveness against the SARS-COV2 virus.

A vaccination regimen including both the Chinese vaccine Sinopharm and Cuba’s Soberana Plus began implementation in Cienfuegos on August 29, starting with residents over 19 years of age.

Delta is responsible for increased transmission in Cuba, while vaccines contain impact

The plan is based on the administration of two doses of Sinopharm, 21-days apart, as recommended by the supplier, and a third injection – 21 days after the second – with Soberana Plus, reported Dr. Dagmar García, director of Research at the Finlay Vaccine Institute (IFV), on Facebook.

She explained that Cuba received a donation of the inactivated virus vaccine Sinopharm, from the Institute of Biological Products of Beijing, adding that it is considered «a safe vaccine, with clinical efficacy of 79%, recommended by the World Health Organization and used in more than 85 countries during the current epidemic,» she noted.

Dr. García added that the Cuban Ministry of Public Health and the IFV proposed this immunization strategy to maximize the efficacy and impact of the vaccine, by securing enough doses to vaccinate the entire population over 19 years of age in the province of Cienfuegos, within a short period.

«This is not a clinical trial, it is an immunization strategy that seeks to maximize efficacy, based on a combination of vaccines,» the doctor in Pharmaceutical Sciences clarified, adding that Soberana Plus is a Cuban vaccine authorized for emergency use to reinforce the immunity of individuals previously vaccinated with another immunogen – in the case of our country, Soberana 02.

The scientific knowledge available on the administration of Soberana Plus as a booster for individuals with pre-existing immunity (produced by vaccination or a previous infection), supports this proposal, involving its use following two doses of Sinopharm, she pointed out.

«In this way, the verified 79% efficacy of the Chinese vaccine – which is in itself adequate to have an impact on epidemiological indicators – should be increased,» she stated.

The Finlay Institute Research expert emphasized that Cuba is a pioneer in the combination of vaccines with the heterologous scheme of Soberana 02 + Soberana Plus, utilized since January 2021.

«Today the world is combining and interchanging vaccines as a strategy to maximize availability and efficacy,» she noted.

Dr. García added, «Health and political authorities in the province of Cienfuegos are in full agreement with the proposal and are providing technical support.»

She invited the population to take advantage of the opportunity, since it is «a solid proposal, which will be complemented with other strategic actions meant to ‘synchronize’ maximum immunity within the population and have an impact on the people’s health,» which is always the objective.