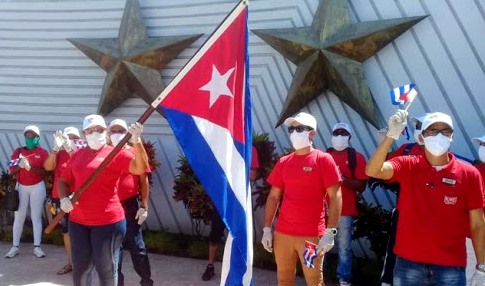 Cuba’s tourism sector is looking forwards to receiving international visitors following the decision to fully reopen borders as of November 15.

In a televised appearance on Wednesday, Tourism Minister Juan Carlos Garcia said that the decision requires the support of all economic sectors. “We must resume our activity based on high quality and satisfaction standards, while all workers must be well aware of the responsibility that entails meeting all established sanitary protocols,” Minister Garcia noted.

Ongoing work is focusing on the preparation of airports, negotiations with airline companies and tour-operators, while all the extra-hotel service network is also expected to reopen.

The government official explained that tourism is the locomotive of Cuban economy and plays a dynamic role involving all other sectors. The resumption of tourism will also benefit state employment and favor the private initiative.

The Minister recalled that from January 1 to August 31 the island received just 163 thousand 743 foreign visitors, some two million 900 less tourists than in similar period before the pandemic appeared here. This adds the negative impact by the strengthening of the US economic, commercial and financial blockade of Cuba which affected the arrival of cruise ships at Cuban harbors.

Washington’s sanctions also banned regular US flights to Cuba, which was blacklisted a country sponsor of international terrorism, while Cuban tourist facilities were included in restrictive US lists, he noted.

In March 2020, following the complex epidemiological scenario around the world, Cuba’s tourist activity reduced to zero and since then only a few hotels on the keys along the northern Cuban coasts, Havana and Varadero were able to operate.

The new stage announced for November is not only an economic issue but also well being for the people and a contribution to boost the new normalcy in the country, the minister said.