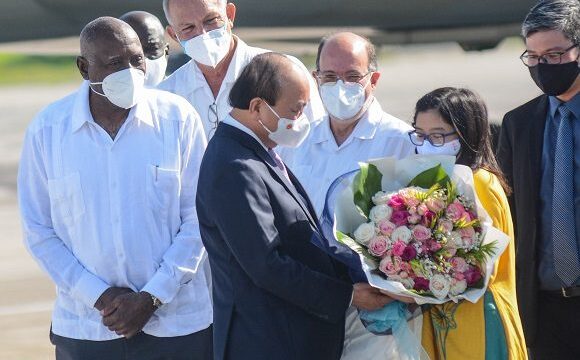 HAVANA, Cuba, Sep 18 (ACN) The president of the Socialist Republic of Vietnam and member of the Political Bureau of the Central Committee of the Communist Party of that nation, Nguyen Xuan Phuc, arrived today in Cuba for an official visit aimed at deepening the ties of friendship and cooperation between the two countries.

Upon his arrival at the José Martí International Airport in the capital, the president was received by Salvador Valdés Mesa, vice president of the Republic and member of the Political Bureau of the Communist Party of Cuba (PCC), as well as Alberto Blanco Silva, director of Asia and Oceania of the Ministry of Foreign Affairs (Minrex).

Xuan Phuc will make a three-day official visit and will hold official talks tomorrow with Miguel Díaz-Canel Bermúdez, First Secretary of the PCC and President of the Republic.

He will also meet with Esteban Lazo Hernández, President of the National Assembly of People’s Power, and pay tribute to heroes José Martí and Ho Chi Ming.

Both nations have maintained a fluid exchange at different levels and have proposed as a common goal to guarantee the irreversibility of socialism and its sustainable development.

Vietnam is Cuba’s second largest trading partner in the region of Asia and Oceania, and the main investor of that continent in this Caribbean country, while it has become its most important rice supplier.

Forged more than 60 years ago by historic leaders Fidel, Raul and Ho Chi Minh during the difficult years of the struggle for the liberation, reunification and reconstruction of Vietnam, both countries will now seek to consolidate their fraternal ties.