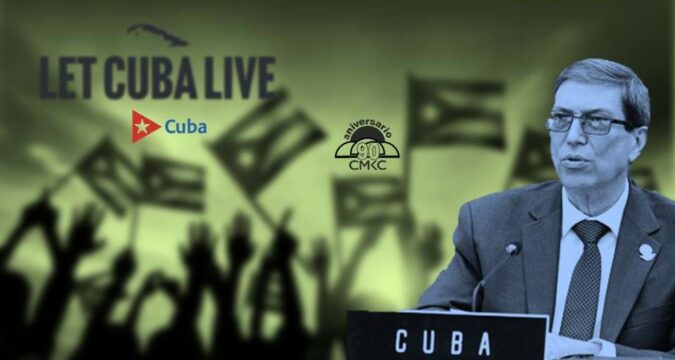 On Twitter, the foreign minister, recalled on the International Day for the Eradication of Poverty, the speech of June 9, 1999, the then president of Cuba delivered at the Summit of Latin American Heads of State and Government and the European Union.

‘Instead of a ‘new architecture’ for an old and outmoded system, it is urgent to demolish the established financial system and create another truly honest, democratic, equitable and humane that helps eradicate poverty and save the world,’ Fidel Castro said.

On Saturday, UN Secretary General Antonio Guterres warned this is a problem that has increased for the first time in two decades, influenced by inequalities between the north and the south.

Guterres said that the Covid-19 pandemic empoverished 120 million people more last year and called to eradicate poverty, fight excessive indebtedness and guarantee investment for recovery in the most needy countries.

He added that the number of women living in extreme poor conditions far exceeds men, and the 22 richest individuals of the world are wealthier than all African women.

Cuba offers opportunities in several sectors to promote beneficial economic ties to multiple companies, said today the president of the Chamber of Commerce of the island, Antonio Carricarte.

The executive intervened by videoconference in Panel IV dedicated to the theme ‘Business and investments after the Covid-19 pandemic’ of the Indonesia-Latin America and the Caribbean Business Forum (INA-LAC) held face-to-face in virtual format.

The event provided an opportunity for the business community, government officials, among others, to explore ways of concrete economic cooperation, Carricarte told Prensa Latina.

The panel discussed the main changes in the business environment and investment climate in Indonesia, Latin American and Caribbean countries.

In statements to Prensa Latina, the president of the Cuban Chamber of Commerce said that the Forum evaluated and promoted the opportunities ‘that exist in our region for Indonesian companies both in trade and investment’.

We presented in particular,’ he added, ‘the benefits offered by Cuba’s national economic development program until 2030 in a number of sectors.

Specifically, he outlined Cuba’s efforts to increase food production and processing, to increase oil exploration and extraction, ‘and there may be opportunities for Indonesian companies in the cultivation of coffee, coconut and the processing of its derivatives,’ he said.

He noted that within the framework of the event he signed a letter of intent to incorporate Cuba into a digital platform designed to promote business and trade between Indonesia, Latin America and the Caribbean.

Carricarte considered that the INA-LAC Business Forum is ‘ a very important initiative at this time to boost trade links between Latin America and the Caribbean with Indonesia and possibly with other countries’.

The organizers conceived it from a regional approach, and this is very positive because it can help to build inter-regional integration and to build joint chains with Indonesian companies and other Southeast Asian nations, he said.

Despite the distance, he estimated that there are opportunities in a group of sectors in which Indonesia has achieved a high level of development, such as energy, construction and food processing. ‘It is an initiative worth promoting,’ the executive concluded.