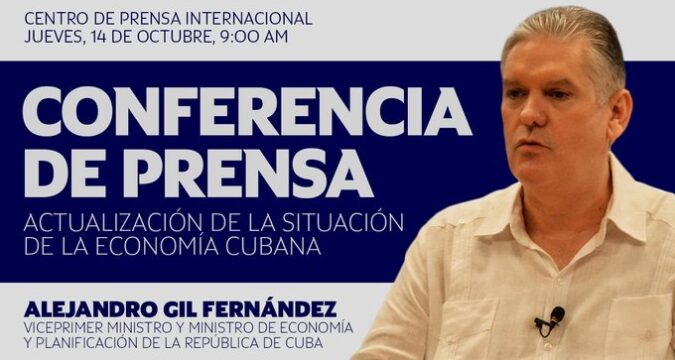 Bruno Rodriguez Parrilla, Cuban foreign minister, highlighted today on Twitter Cuba’s progress in the gradual recovery of its economy, despite the impact of the COVID-19 and the tightening of the U.S. economic, commercial and financial blockade.

Rodriguez Parrilla underlined the strengths of a diverse productive network and the improved participation of entrepreneurship.

In a press conference, minister of economy, Alejandro Gil, pointed out on Thursday that the country will close 2021 with a moderate growth; however, there is optimism for the coming year with good results.

He explained how complex and tense the scenario has been, characterized by a paralyzation of most of the country’s activities, among them, those of vital sectors such as tourism.

According to him, the country is beginning a gradual stage of its economic recovery, accompanied by the continuity of the measures approved in order to achieve the long-awaited transformation of the economy, of its actors, and of an improvement in the quality of life of Cubans.

The Ministry of Economy and Planning (MEP) approved another 67 micro, small and medium-sized enterprises and the first two non-agricultural cooperatives.

The agency reported that of the MSMEs, 66 are private and one is state-owned, adding that the two most represented activities are manufacturing productions with 16 businesses and food production, with 13.

Six of them are part of local development projects, two have previously carried out export activities and one is incubated in the Science and Technology Park of Havana.

The MEP clarified that job creation is one of the objectives sought by the promotion of these new forms of management, which will provide some new jobs in the economy.

The institution added that of the second group, 41 are reconversions of pre-existing businesses, while 28 are newly created.

This approval is in addition to that of last week, when the first 35 MSMEs were announced as part of the improvement of economic actors, bringing the total to 102 MSMEs and 2 CNAs.

The MEP continues to process the applications that have been received through the Economic Actors Platform and highlighted that so far no application has been denied.