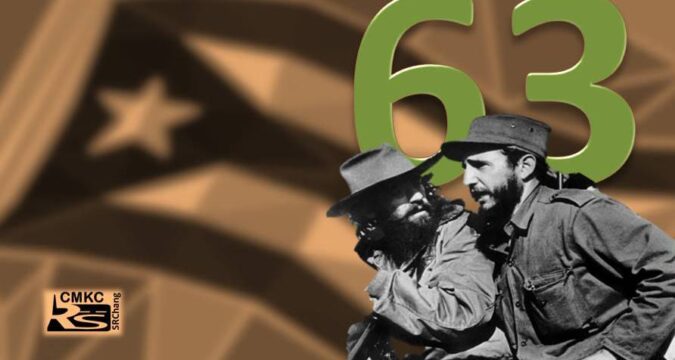 Image: Santiago Romero Chang
It was a Resounding Victory of our Guerrilla Forces- The withdrawal of the last units of the tyranny’s army from Las Mercedes was the definite defeat of the great enemy offensive against the rebel territory of the First Front of the Sierra Maestra, during which the military command of the dictatorship launched its most powerful resources in a final attempt to destroy the central guerrilla nucleus.

The courage, tenacity, heroism and capacity of the rebel fighters in the fierce and organized defense of the positions, and the forceful application of all the tactical forms of guerrilla action, disarmed the offensive in 74 days of incessant and intense battle.

Within this brilliant performance of all our combatants, a group of brave and efficient captains who lead their men in the front line of combat, with intelligence and courage, made a significant contribution in particular to this victorious outcome.

In this final balance it is obligatory to highlight, in the first place, Che and Camilo, who fulfilled their role of being my main lieutenants at different times, as well as Andrés Cuevas, Ramón Paz, Daniel, Angelito Verdecia, Ramiro Valdés, Guillermo García, Lalo Sardiñas and Pinares, among others.

As I wrote in the report read by Radio Rebelde on August 7th, just the day after the Battle of Las Mercedes was concluded:

The offensive has been liquidated. The greatest military effort ever made in our Republican history ended in the most dreadful disaster that the arrogant Dictator could have imagined whose troops in full flight, after two and a half months [of] defeat after defeat, are marking the final days of his odious regime. The Sierra Maestra is now totally free of enemy forces.

The defeat of the enemy offensive, after 74 days of incessant combat, signified the strategic turning point of the war. From that moment on, the fate of the tyranny was definitively sealed, as the imminence of its military collapse became evident.

That same day I wrote a letter addressed to Major General Eulogio Cantillo, who directed the entire enemy campaign from the command post of the area of operations, based in Bayamo. I confirmed to Cantillo that our forces were holding around 160 soldiers as prisoners, among them many wounded, and that we were ready to immediately establish the pertinent negotiations for their surrender. After complicated negotiations, this second surrender of prisoners took place several days later in Las Mercedes.

In the course of those 74 days of intense combats for the rejection and defeat of the great enemy offensive, our forces suffered 31 fatal casualties. The sad news never reduced the spirit of our forces, although the victory was often bitter for us. Even so, the loss of combatants could have been much higher, taking into account the intensity, duration and violence of the ground actions and air attacks, if they were not it was due to the extraordinary expertise achieved by our guerrillas in the wild nature of La Maestra and the solidarity of some rebels with others. Many times, seriously wounded people saved their lives, in the first place, because their comrades did the impossible to transfer them to where the doctors could assist them, and all, in spite of the harshness of the terrain and the whistling of the bullets in the middle of the combats.

Throughout these pages I have been mentioning the names of the fallen, but I want to relate them all again here to offer at once the complete picture of our martyrs, deserving of the eternal memory of respect and admiration of all the people. They are:

Farming collaborators: Lucas Castillo, other members of his family, and Ibrahim Escalona Torres.

Honor and eternal glory, infinite respect and affection for those who fell then.

The enemy suffered more than 1,000 casualties, including more than 300 dead and 443 prisoners, and no less than five complete large units of their forces were annihilated, captured or disarticulated. We were left with 507 weapons, including two tanks, 10 mortars, several bazookas and 12 30-caliber machine guns. Published text «The Strategic Victory», by Fidel Castro