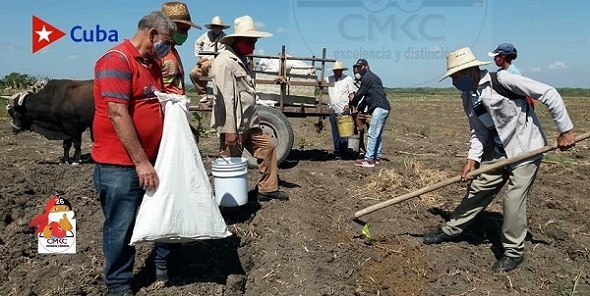 By: Indira Ferrer
Misael Cabrera says, «We have to take from the land all that it can give us», and his gaze is lost in the land planted with plantain and yucca. The production manager of the Laguna Blanca agricultural company knows well how much effort is needed to back up the phrase he has just uttered with facts.

It is clear to the workers of the largest supplier of various crops in this province that achieving this goal is no easy task, and they are redoubling their efforts to achieve greater efficiency and reduce economic losses.

«In order to produce more and comply with what the top management of the territory is demanding of us, we have to work hard: to achieve an optimal exploitation of the land and prepare it properly for planting. We have to sow more and use good seeds, improve the technical condition of the plantations; carry out, as far as possible, intercropping, staggering and crop rotation; improve phytosanitary care and ensure irrigation by complying with the established cycles,» he explains.

For the hard-working people of the vast plains north of Contramaestre, the challenge is great. They are now engaged in the closing of the winter planting plan, which will culminate on February 24th and for which they are committed to reach 7 222 hectares (17 845 a). In addition, they are cultivating the land for the spring campaign.

«We are in land preparation with support from other provinces. We have a team of five high productivity tractors, which together with ours, are reporting 120 hectares (296 a) a day. We think that at this rate we will be able to finish what is left of the winter season and start the spring season with the necessary potential to have good results», Mr. Cabrera assures.

One of the priorities of the area is to take advantage of the mobile irrigation system and the investment made in 2021, which allowed the installation of new turbines and the reestablishment of pumping in the Cauto River sand trap. They know that, if the irrigation machines are well used, they will be able to achieve high volumes of grains, vegetables and fruits on more than 900 hectares (2 223 a).

To repopulate banana plantations; to intercrop banana varieties with cassava, sweet potatoes, carrots, beets and other crops; to increase the planting of fruit trees (especially guava and papaya) and medicinal plants, with some 24 species to be planted this year; these are the collective’s goals.

In addition to the economic goals, there is an urgent need to promote a social transformation in the agricultural organization’s environment. It is a question of fulfilling the premise that the socialist state enterprise should be more efficient and contribute to the solution of problems of the workers and their families; at the same time that it should provide benefits to the nearby communities. And this could also favor the productive entity.

«The revival of the 14 settlements of Laguna Blanca, in which all the agencies of the municipality participate together with our company, will stimulate many people who, due to lack of motivation or knowledge, do not join production. The entry of labor force to the field will help to obtain higher yields: more quintals and more varieties of food for the people of Santiago de Cuba,» he said.

Laguna Blanca has the commitment to exceed the plan of 27,000 tons of grains, fruits and vegetables in 2022, with the achievement of three thousand tons more.

The figure does not exceed the productive potential of this agricultural center; therefore, if the land preparation work is carried out in a timely manner and with the required quality, if good seeds are sown and the irrigated areas are used, the planned volumes can be achieved.

At least 157,000 people in the municipalities of Santiago de Cuba and Contramaestre benefit directly from the food that comes from this land. Hence the importance of achieving agriculture that contributes to satisfy the basic needs of the population; that is economically viable and improves the quality of life of producers and society as a whole.