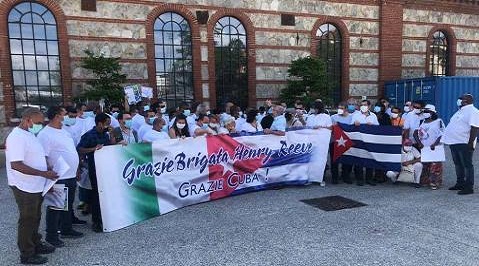 The municipal council of the Tuscan city of Campi Bisenzio approved on Tuesday a resolution in favor of ending the economic, commercial and financial blockade imposed by the United States on Cuba for almost six decades.

The initiative presented by the leftist forces grouped in the Campi a Sinistra Group was supported by the majority of the members of the local political-administrative management and control body, with the abstentions of the representatives of the right-wing parties Fuerza Italia and the League.

In a dialogue with Prensa Latina, Councilman Lorenzo Ballerini, head of the group and a member of the Communist Refoundation Party, stressed the importance of the agreement that calls on the municipal administration to heed the call of the Cuban community living in Europe to end the blockade against Cuba and its people.

The motion also calls on the Metropolitan City of Florence, the Tuscany Region and the Italian government to embrace this call against the blockade, which has been intensified by the U.S. government ‘even now when the whole world is hit by the Covid-19 epidemic.’

In that sense, he highlights Cuba’s response to Italy’s request for help with the sending of health collaborators who are members of the Henry Reeve Contingent, in line with the solidarity commitment shown by the Caribbean nation in the field of health for decades.