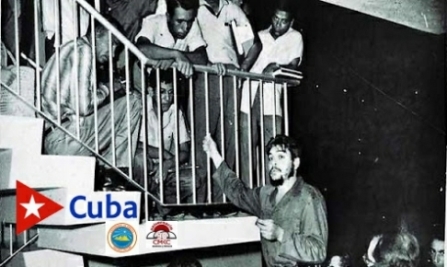 The current Government visit to Santiago de Cuba coincides with the 61st anniversary of Commander Ernesto-Che- Guevara’s visit to the University of Oriente campus.

It was October 17, 1959 when Che went to the Quintero hills. Note Che in the picture. Although the most notable one is when he talks informally on the stairs of the main office building.

I can imagine Che talking to students and members of staff in a lecture that deserves more attention:

Che: “The Revolution and the University”

These 60 years of the first visit by Commander Ernesto-Che-Guevara will be one of the main motivations for the beginning of the school course at the University of Oriente next Tuesday, according to university sources.

Che’s lecture aimed at defining the role of higher education in the then current transformations.

According to Dr. Frank Solar, during an interview with Radio Reblede in 2017, Che returned to the eastern Alma Mater in 1961 accompanied by Commander Raul Castro, when they talked with university authorities and students.

The University of Oriente has many things to celebrate. It was declared Center of Excellence three years ago. It turned 72 years old in October 10th, 2020, which makes it the 2nd oldest university in the country. 50 years ago they organized the Cuban Communist Party in campus.

Another significant anniversary to celebrate is  the construction of the Antonio Maceo University City, which implied a radical transformation in the access to registration when the sons and daughters of peasants and workers entered the university. Facilities were created such as dormitories for students from the then Oriente province (from Guantanamo to Camaguey).

The participation of the university community in the 10 million-ton sugar cane harvest in 1970 will be remembered for its voluntary patriotic zeal for the development of the country.

The university has delivered to society more than 65 000 professionals. This center was the embryo out which many other higher education centers were born in the eastern part of Cuba. Since 2015 the teacher training college and the sports college merged into this university.