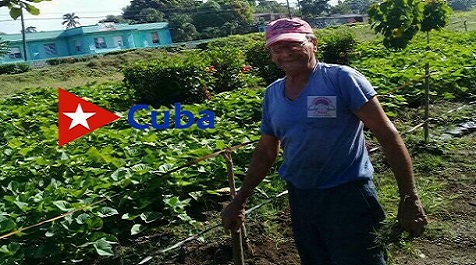 By Camilo Gonzalez
Rafael Santiesteban, the president of the National Association of Small Farmers (ANAP in Spanish) stated in this city of Santiago de Cuba that Cuban farmers have a sacred mission: to produce more food.

He said so during a meeting with the ANAP presidents and controllers of the cooperatives of the municipalities Songo-La Maya, Santiago de Cuba and Guama, where they analyzed the strengths and weaknesses of these municipalities.

Mr. Santiesteban, who is also member of the central committee of the Party and of the Council of State of the Republic of Cuba, mentioned a series of agreements and measures that are being implemented to increase production and improve the quality of life of its members and their families.

He also defended the idea of strengthening the agricultural production cooperatives for these are the ANAP superior form of production with their force to face different processes.

With the tightening of the U.S. blockade of Cuba and the impact of the COVID-19 pandemic on key sectors of the economy, boosting food production is essential

Despite the dissatisfaction and demands for change, which we present to the UN along with other states and millions of citizens around the world, the Cuban Revolution will always uphold the existence of the Organization, to which we owe the little but indispensable multilateralism that has survived imperial arrogance.

More than once, in this very forum, Cuba has reiterated its willingness to cooperate with the democratization of the UN and the upholding of international cooperation, which only it is capable of saving. As stated by the First Secretary of the Communist Party of Cuba, Army General Raúl Castro Ruz, and I quote:

“The international community can always count on Cuba’s honest voice in the face of injustice, inequality, underdevelopment, discrimination and manipulation, and for the establishment of a more just and equitable international order, in which human beings, their dignity and wellbeing come first.” End of quote.

Díaz Canel: Our people, who take pride in our history and are committed to the ideals and achievements of the Revolution, will resist and triumph

Returning to the seriousness of the present situation, which many blame only on the COVID-19 pandemic, I believe it is imperative to note that its impact goes far beyond the health sphere.

Given its nefarious consequences, the shocking number of deaths, damage to the world economy, and the deterioration of social development, the pandemic’s continued proliferation over the last few months has caused anguish and despair among leaders and citizens in practically all nations.

But the multidimensional crisis it has unleashed clearly shows the erroneous nature of the dehumanizing policies imposed by the dictatorship of the market.

Today, we are witnessing with sadness the disaster to which the world has been led by the irrational, unsustainable production and consumption patterns of capitalism, decades of an unjust international order, and the implementation of ruthless, unfettered neoliberalism, which has exacerbated inequalities and sacrificed the right of peoples to development.

Unlike exclusionary neoliberalism, which casts aside and divides millions of human beings and condemns them to surviving on the leftovers from the banquet of the richest one percent, the COVID-19 virus does not discriminate, but its devastating economic and social effects are lethal for the most vulnerable and those with lower incomes, whether they live in the underdeveloped world or in pockets of poverty within large industrial cities.

According to projections by the UN Food and Agriculture Organization (FAO), the 690 million people going hungry in 2019 will be joined by another 130 million as a result of the economic recession caused by the pandemic. Studies by the International Labor Organization (ILO) indicate that over 305 million jobs have been lost and that those of more than 1.6 billion workers are at stake.

We cannot confront COVID-19, hunger, unemployment and growing economic and social inequality between individuals and countries as unrelated phenomena. Urgently needed is the implementation of comprehensive, integrated policies that prioritize human beings, not profits or political interests.

It would a crime to postpone decisions needed yesterday, and today. It is imperative to promote solidarity and international cooperation to mitigate the impact.

Only the UN, with its global membership, has the required authority and reach to resume the just struggle to cancel the uncollectable foreign debt which, aggravated by the social and economic effects of the pandemic, is threatening the survival of the peoples of the South.