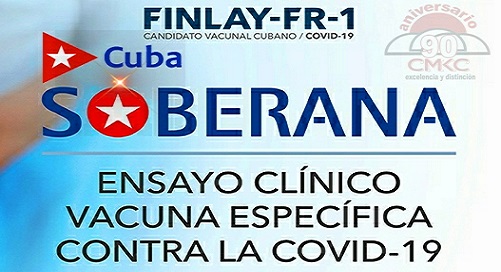 La Jornada newspaper today highlights in its international section the progress of the Cuban vaccine candidates Sovereign 1 and 2 against Covid-19, which are in the clinical trial phase.

The newspaper quotes the general director of the Finlay Vaccine Institute (IFV), Vicente Vérez Bencomo, who assured that progress is being made in the clinical testing of the first two formulations of the vaccine, which have shown great safety.

According to the researcher, he adds, the work does not stop and scientific evidence constantly appears that is carefully evaluated.

The scientist said that recent international results from different clinical trials showed a very large difference between the response in animals and in humans, which led Cuban scientists to design various formulations of the vaccine to be able to evaluate their immune response and decide which one it will be optimal.

He also commented that the advances obtained in animals with Sovereign 2 will allow clinical trials to begin in October under the permission of the Regulatory Authority for Medicines, Medical Equipment and Devices, reports La Jornada.

The scientist pointed out that the researchers aspire to advance in the studies related to the immune response before the end of this year and maintain the intention of beginning to vaccinate the Cuban population during the first half of 2021.

The Cuban formula is based on a recombinant protein, which makes it different from other projects that are developed in the world from adenoviral vectors or inactive viruses.