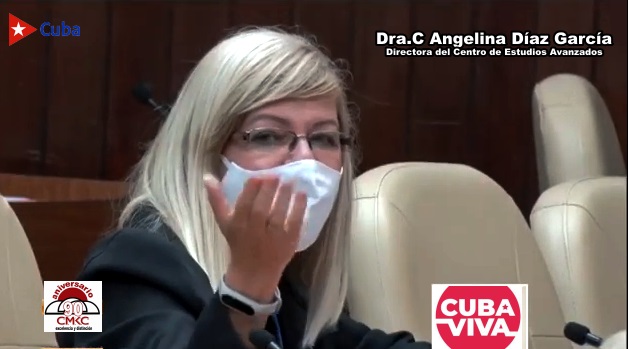 The President of the Republic, Miguel Díaz-Canel Bermúdez, again met with scientists and experts who, for more than ten months, have contributed to the COVID-19 battle in Cuba. Yesterday, January 13, they presented recent results which included an update on the development of a diagnostic based on magnetic extraction of virus RNA using nanotechnology.

According to Dr. Angelina Díaz García, director of the Center for Advanced Studies, the development involves the laboratory reagent that allows for extracting the genetic material, which is an essential step in PCR testing for COVID-19.

Dr. Diaz reported that the Cuban version was evaluated at the Pedro Kouri Institute of Tropical Medicine, and was found to function in 100% concordance with imported kits, and meets all regulatory requirements.

She announced the commitment to produce kits for 20,000 daily extractions, this year, with several institutions participating, including self-employed workers.

Cuba has developed the production of swabs for sample taking, a transport medium for collection and transfer of samples, and now this diagnostic.

Dr. Rolando Pérez Rodríguez, BioCubaFarma’s director for Science and Innovation, stated that the goal is to produce a complete diagnostic system.

These capacities, he clarified, will not only facilitate testing for COVID-19, but for a variety of viral and bacterial infections, as well as chronic non-transmissible diseases, including cancer. The project, which should be completed in 2022, is directed toward producing everything required for molecular diagnosis, he said.

Havana, January 13 (RHC) The president of the Republic, Miguel Díaz-Canel, met at the Revolution Palace with the scientists and experts who for more than ten months have contributed to the confrontation of  COVID-19 in Cuba.

In the current complicated epidemiological situation, the support of science is fundamental. This was confirmed in the meeting, where several results were announced.

One of them is a nanotechnology-based reagent for the magnetic extraction of RNA, short for ribonucleic acid, another step of national science to achieve technological sovereignty and to replace the increasingly expensive imports to detect the disease.

Dr. Angelina Díaz García, director of the Center for Advanced Studies, explained that it is the laboratory reagent that allows extracting the genetic material, which is an essential step in PCR test processes.

Diaz Garcia said that this product was validated by the Pedro Kouri Institute of Tropical Medicine, it has a 100% concordance with the imported reagents; it does not need a cold chain. It complies with the Regulatory Authority of Drugs, Equipment, and Medical Devices of the Republic of Cuba, CECMED.

Dr. Diaz-Garcia announced that the commitment is to make kits for some 20 thousand extractions daily for this year. The production involves several institutions, including a self-employed worker.

So far, Cuba has managed to produce the swab for sample taking, the means of transport and transfer for collected samples, and now this reagent.

Doctor Rolando Pérez Rodríguez, BioCubaFarma’s Science and Innovation Director, affirmed that the idea is to set up the complete system for the final diagnosis.

«The new capacities would not only be good for COVID-19 but any disease of viral, bacterial origin, the chronic nontransmissible ones, including cancer,» explained the researcher.

He added that everything required for the molecular diagnosis would be produced on the island, and he affirmed that by 2022, Cuba would have all that technology.

Its main purpose is to promote the presence of the Caribbean country in the bionanotechnology international market.

The Cuban Center for Advanced Studies (CEA) for the development of nanoscience and nanotechnologies was inaugurated this Thursday as the national headquarters for research in this field, focused mainly in the areas of biotechnology and medicine.

Located west of Havana, the CEA is a multidisciplinary center and one of its main purposes is to promote the presence of the Caribbean country in the international market of bionanotechnology, a discipline that seeks to build nanometer-scale machines using the knowledge of molecular biology.

The opening of the “first stage” of the institution was presided over by Cuban President Miguel Díaz-Canel, who reported on this and other visits to different Cuban institutions on his official Twitter account.

According to the site of the Presidency of the island, the CEA is a “dream” of deceased former President Fidel Castro, “conceived and promoted by the leader of the Revolution and by Fidel Castro Díaz-Balart,” his eldest son, who served as scientific adviser to the island’s Council of State until his death in February 2018.

Under construction since 2006, its opening was scheduled for 2016, according to reports from the state press, which reported four years ago on the progress of the project, designed to develop “from medicines and tissue regeneration to disease detection devices.”

The installation includes a group of laboratories for the study of nanochemistry, nanobiology, nanocharacterization and nanoengineering, as well as facilities for obtaining nanostructures, nanometer-scale visualization and high-resolution analysis of compounds and structures, the official media advanced at the time.