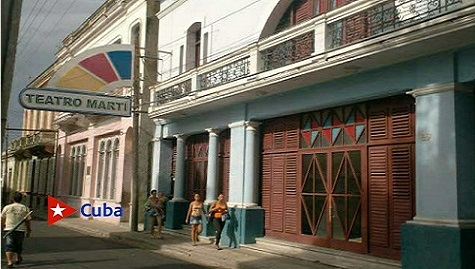 By: Oscar Ignacio Ruano
Santiago welcomes the Day of Cuban Theater, an artistic expression that not only delights, teaches and enlightens; a scenic art very affected by the current resurgence of COVID-19 and that far from stopping, the theatrical manifestations continue virtually in StreamingCuba through social networks.

Cuba commemorates the Cuban Theater Day as a tribute to the tragic events of the Villanueva Coliseum that took place 152 years ago, shortly after the beginning of the war of independence against Spain.

On January 22nd, 1869, a Cuban buffo theater performance on the stage of the also known as the Villanueva Circus in Havana ended in a confrontation between the armed corps of the Volunteers of the Metropolis and the civilians who attended the play.

Historical investigations do not agree on the exact number of dead and wounded after the repression, due to the fact that the Spanish authorities hid the real data. However, they do coincide in pointing out that the events took place in a tense context of contradictions between Spain and its colony due to the insurrectional movement in the east of the country and the seditious support in the cities.

On October 10th, 1868, Carlos Manuel de Cespedes freed his slaves to fight for a free Cuba and three months later a new Captain General, Domingo Dulce, arrived in the country to try to pacify the uprising.

According to official sources, Dulce granted freedom of assembly and of the press, decreed an amnesty to stimulate desertion in Cespedes’ troops and applied other measures in that sense.

In the same month of his arrival in January 1869, the inhabitants of Bayamo set fire to the city before surrendering it to the enemy, and in the capital the police discovered a deposit of weapons and ammunition, and other events took place to atone for the violence of the Volunteer Corps.

Cuban historian Emilio Roig pointed out that at the Villanueva «the plays and songs that were offered were approved by the censorship, but the actors were in charge of giving the words and phrases of double meaning the appropriate patriotic intention».

In this context, for the January 22nd  performance entitled Perro huevero…. (Old Dog…) by Juan F. Valerio, the Volunteer Corps was stationed outside the theater in order to repress any sympathy towards independence.

Among the dead were Cuban landowner Pablo Gonzalez, son of the Count of Palatino, and his eight-year-old son. According to historians, the Cuban Apostle José Marti, at that time 15 years old, was very close to the place together with his teacher Rafael Maria de Mendive, taking care of the last preparations of his publication La Patria Libre (The Free Homeland).

I knew Miguel Matamoros was part of the history of Cuba

In fact, the following day, Marti published in that issue his dramatic poem Abdala, which describes the resolution of a young man to defend the freedom of his native land even if it costs him his life.

After the events in the theater, no member of the Volunteer Corps was prosecuted and two years later those same soldiers provoked another event that shocked colonial Cuba: the shooting of eight medical students.