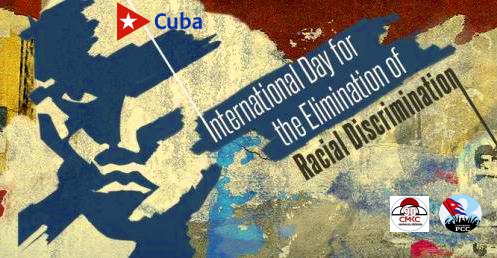 “We will confront all vestiges of racial discrimination in our society and advance further in the Cuba Revolution’s emancipatory work,” Cuban President Miguel Díaz-Canel Bermúdez stated on March 21, designated International Day for the Elimination of Racial Discrimination by the United Nations.

In a message posted on his Twitter account, the President emphasized that Cuba has a national program, established by the Council of State, to combat racism and racial discrimination.

Since its approval in November of 2019, the program has outlined a plan to address a problem that will only be eradicated with comprehensive, integrated efforts and responsibility shared by all involved.

Diaz-Canel emphasized the commitment of the country’s leadership. The government commission directing the program is chaired by the President himself and includes representatives from 18 state bodies and an equal number of organizations active in civil society.

The ministries of Culture, and Foreign Affairs, as well that of Science, Technology and Environment and the Union of Cuban Writers and Artists, collaborate directly in taking action.

International Day for the Elimination of Racial Discrimination is held every March 21, in honor of the date in 1960 when police opened fire on a peaceful demonstration against apartheid in Sharpeville, South Africa, killing 69 persons.

Racism: A barbarity to be eradicated

The eradication of racism is today a priority in Cuban educational programs, and the emphasis on a more inclusive culture must be consolidated as a central objective of our social project

Maceo – Che and his 200 million followers

To build this wall,

Bring me all hands:

Racism – that barbaric myth of our time – lies in the subconscious and must be eliminated altogether. It is the child of prejudice, another scar on the human species that does as much psychological damage to the victim as the perpetrator. Anthropologist Ashley Montagu, in a dramatic statement, said, «The fallacy of race is the most damaging of human myths.”

Martí stated: «There is no race hatred because there are no races.» Nonetheless, we regret that today in our country there are vestiges of an absurd racism that we know was born of the blind greed generated by the slave trade and the infamous ideological system that supported it in an attempt to consolidate a supremacist social hierarchy.

Cuba calls for intensifying global efforts against racism in Geneva

Fernando Ortiz understood early on that racism against black men and women was directly related to colonialism and slavery. He rejected the idea of Africa as a ‘dark’ continent and dedicated practically his entire life to reevaluating the country’s diverse African cultures with the goal of contributing to the integration of the Cuban nation and to the identity of our people. He was, no doubt, a pioneer of such efforts, as were José Martí and Nicolás Guillén.

Cuba and the complex relationship between the individual and the collective

Eradicating racist sentiments is not only the work of therapists. It is necessary to investigate in the cultures of the African peoples who bequeathed to Cuba an immense cosmic and artistic treasure. Erasing the perfidious murmur of the subconscious is key, since this is where racial prejudice is cradled. The flowers of the desert must be watered with sand. Only in this way can we see the flowering of a pure and transparent consciousness.

Racial discrimination expresses the most spurious feelings of the human species, and it is sanctioned by law, because it is a crime against culture. Every nightmare that leads to a violation must be uprooted. To leave dark areas in the subconscious means never overcoming them, maintaining their presence. The triumph of reason and the birth of a humanistic civilization must be celebrated. This is the path we wish to travel to reach the clear horizon.

Proclaiming the existence of races is as absurd as the efforts of theologians in the Middle Ages to count the number of angels that could dance on a pinhead.

The eradication of racism is today a priority in Cuban educational programs, and the emphasis on a more inclusive and non-prejudicial culture must also be consolidated as a central objective of our country’s social project.

«Cubanness is not in the blood, it lies principally in the peculiarity of a culture, that of Cuba,» Fernando Ortiz insisted.

«Everything that divides men, everything that specifies, sets apart or corners them, is a sin against humanity,» wrote José Martí. And of course, this statement applies to all types of discrimination.

Racism is a diabolical cultural construct that does not validate human nature, and is incompatible with socialism. Fidel Castro made this clear with his thinking, founded on that of Martí and Maceo, and his emancipatory action. Once again he anticipated the designs of history.