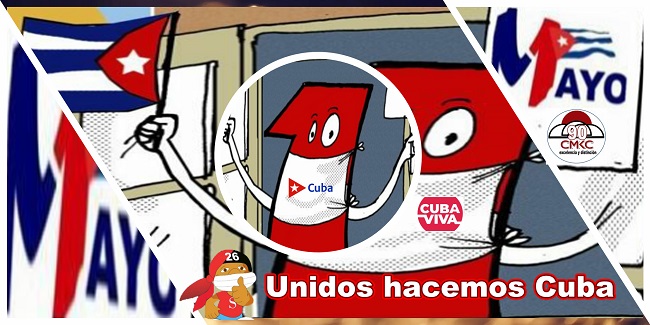 “On this occasion, May Day commemorations will be held virtually, under the maxim of: Making Cuba, united…”

Under the slogan Workers’ and People’s Unity, the Cubans celebrated the International Worker’s Day on May 1st, 1959, for the first time after the triumph of the Revolution.

Under the slogan Workers’ and People’s Unity, the Cubans celebrated the International Worker’s Day on May 1st, 1959, for the first time after the triumph of the Revolution.

Meanwhile, Commander-in-Chief Fidel Castro arrives in Argentina to participate in a regional conference.

1890- Cuba is among the first countries that celebrates the International Workers Day, paying tribute to the martyrs of Chicago and in compliance with the agreements reached at the International Socialist Labor Congress which took place in Paris on July 1889.

The Club of Workers in Havana organizes a demonstration in which some 3 000 people march on the main streets of the city. Campo de Marte is the starting point of the march that begins at 3:00 pm, the demonstrators take Monte street, then Águila, Reina, Galiano, San Rafael, Consulado and end it with a rally at Skating Ring sports center.

1919- In a large proletarian rally held at Payret theatre, the working people express their solidarity with the October Revolution and the struggles of the workers in Europe.

1925- Carrying red flags, over 4 000 workers marh together with members of the Agrupación Comunista de La Habana.

Revolutionary leader Julio Antonio Mella speaks from the Lenin Hill, the Club of Cigar Makers, Guanabacoa City Hall and from the Nuevo Frontón (today the venue of Cuban Workers Trade Union Federation CTC), in which he called dictator Gerardo Machado, a tropical Mussolini.

1964- We Hill defend this flan, this sky and this land at any cost, assures Fidel Castro in a May Day rally held at José Martí Revolution Square.

1980- An impressive gathering takes place at José Martí Revolution Square. National leaders and Latin American personalities delivered their speeches. This act ends with Fidel Castro’s key address. The Commander-in-Chief reaffirms the stance of the people against the US blockade, the naval base (Gitmo) at Guantánamo Bay and the spy flights over Cuba.