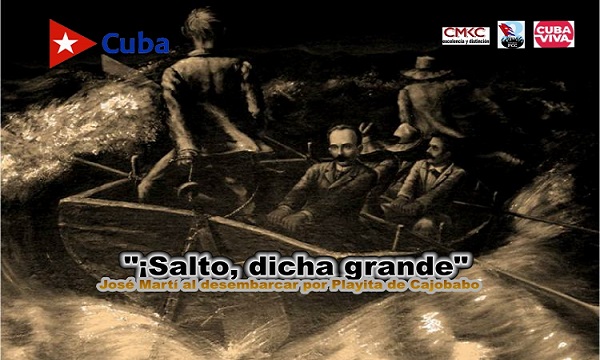 Cuban President Miguel Díaz-Canel stressed the continuity of the Revolution, which he considers a single one since the struggles for independence from Spain to the present day.

The president, in his Twitter account, evoked the moment when historic leader Fidel Castro commemorated the centenary of the landing of José Martí, Máximo Gómez and other patriots at Playita de Cajobabo, in the east of the island, who arrived on April 11, 1895 to join the war against Spain.

«On the night of April 11, 1995, #Fidel went to Playitas at the same time that 100 years earlier, Martí arrived with Gómez on the pebble beach, at the foot of Cajobabo. He raised the flag, almost into the sea and saluted history,» wrote the head of state on the social network, adding that the Revolution is one.

On February 24, 1895, Cubans resumed their struggles for independence from Spain, a contest organized by José Martí, at the head of the Cuban Revolutionary Party.

Antonio Maceo, Flor Crombet, José Maceo and other patriots reached Cuban shores through Duaba, in the eastern part of the country on April 1 of that year, while Gómez, Martí, Marcos del Rosario and others arrived 10 days later, after a night crossing in rough seas.

«They get off the boat. It’s raining hard when we start. We are in a bad way. Diverse and jumbled ideas in the boat. More squalls. The rudder is lost. We set course. I take the bow oar. We gird on our revolvers. The moon peeps out, red, under a cloud,» wrote Martí in his campaign diary.

«We arrived at a pebble beach, the little beach at the foot of Cajobabo, I stay in the boat the last one emptying it,» he commented on that emotional moment.

«I jump. A great joy,» said the Cuban National Hero about the epic, an event that the leader of the Cuban Revolution Fidel Castro, celebrating the centenary, called an extraordinary feat.

On one anniversary of Martí’s birth, Fidel asked, «Why not erect a living monument to the beautiful, profound truth contained in Marti’s axiom: «To be educated is the only way to be free?”

We have reached this January 28, 2021, having traveled a hard road, full of obstacles and traps, with the blockade tightened beyond all imaginable limits and a pandemic taking a lethal toll of more two million deaths on the planet.

Cuba’s dignified resistance defeated the 240 measures imposed by Trump, intended to asphyxiate our economy and undermine the people’s support for the Revolution. As President Díaz-Canel said, «They threw us to our death, and we are alive.»

The subversive projects implemented with the use of mercenaries, «independent media» and social networks, only managed to fleetingly confuse a few people and add a new cartoonish chapter to the anti-Cuban campaign.

In the face of aggression by a frantic, rabid Goliath, sick with hatred and impotence, David appears as Martí always evoked him: a moral giant.

The small, besieged and slandered island has confronted covid-19 with scientific rigor, a spirit of solidarity and unquestionably positive results, both within its borders and in another 40 countries and territories. Ours is also among the very few nations that are making progress in the development of their own vaccines.

The Northern Empire, on the other hand, the world’s greatest superpower, responded to the epidemic in a negligent, inhumane manner, focusing on the electoral and economic repercussions of the virus and not on those it had, and has, on the health of its citizens. The U.S. population is paying for the insensitivity of its rulers with the loss of many lives, particularly among the poorest.

At the same time, manipulations meant to discredit our doctors serving abroad failed in the face of the exemplary professionalism and generosity they leave wherever they are.

Martí was also obliged to respond to defamations launched in the U.S. press against his cause and his compatriots, and to defend, with passion and sound arguments, the capacity of Cubans to govern themselves and build a Republic free from the evils he saw and suffered in several Latin American countries and, above all, within the United States.

A free, sovereign, just Cuba, capable of putting a brake on the imperial drive, along with Puerto Rico and other Antilles, and thus contribute to creating “the equilibrium” still lacking in the world.

The «stillborn who have no faith in their land» called him «crazy» for his convictions, integrity and patriotic fervor. Many years later, other cynical stillborns, the ideologues of neo-annexation, likewise lashed out at him and harshly dismissed his «delusions» about the destiny of an island they believed doomed to submission to the powerful neighbor.

Of course, they have similarly attacked his best disciple, Fidel, heir to this noble «madness,» who founded a socialist, internationalist homeland, faithful to Martí’s ideas, and made transcendental contributions to equilibrium in the world.

On the 150th anniversary of the birth of the Apostle, Fidel returned to Martí’s influence on the protagonists of the assault on the Moncada:

«(…) from him we had received, above all, the ethical principles without which a revolution cannot even be conceived. From him we also received inspiring patriotism and such a superior concept of honor and human dignity that no one else in the world could have taught us.»

This legacy that nurtured the Centennial Generation has, since 1959, become the patrimony of the great majority of the Cuban people and continues to be essential.

The struggle waged by the Apostle to counteract the advance among Latin American politicians and intellectuals of the Yankee «model» as an idealized paradigm, synonymous with «modernity», «development» and «freedom,» has not lost its validity.

That is why he endeavored so tirelessly to dismantle the myth. He denounced, among many other humiliating features of the supposed «model,» the arrogance and hegemonic ambitions of «the American Rome,» the obsessive cult of money as a cancer that gnaws at the foundations of that society and the control exercised by «colossal, opulent companies» in the elections.

He wrote these concise words about U.S. «democracy,» «I do not want the people of my land to be like this one, an ignorant mass ruled by passions, who go where they are led, with noises they do not understand by those who play their passions as a pianist plays the keys.»

Cultural decolonization is another basic component of Marti’s thought. Although the pandemic revealed categorically the cruelty of neoliberalism and accelerated the empire’s decadence and declining credibility, the colonizing machinery of the advertising, information and entertainment industry maintains its effectiveness.

The decolonizing projects designed by Martí – from the Edad de Oro to his dazzling journalism – contain instruments of enormous value for the development of a cultured, free human being who cannot be manipulated, which is at the core of our educational project. In this field, he left unique lessons for his era and for the future, for Cuba, the Latin American and Caribbean region, and all humanity.

This is why Fidel asked so forcefully on one anniversary of Martí’s birth: «Why not erect a living monument to the beautiful, profound truth contained in Marti’s apothegm: «To be educated is the only way to be free?”

Fidel was not proposing a sculpture or an obelisk. He was most likely thinking of the deep, full, continuous exercise of one of the key elements of his concept of Revolution, the one summoning us to «emancipate ourselves on our own and with our own efforts.»