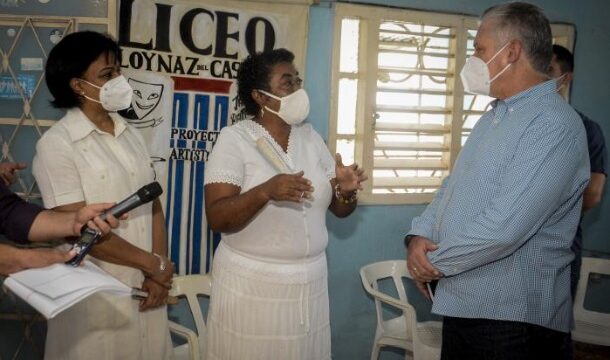 Party First Secretary and President of the Republic, Miguel Díaz-Canel: yesterday visited the Afro-descendant Neighborhood Network community project fighting racism and racial discrimination, and Manuel Fajardo University of Physical Culture and Sports Sciences, attending, as well, a meeting at Latinoamericano Stadium with baseball players training for pre-Olympic games where they will compete to classify for Tokyo 2021,

When a society has great aspirations to continue expanding its ideal of justice, of working for the common good and being useful, every site can be school, from the community to the university, including places like those visited Thursday by the First Secretary of the Party Central Committee and President of the Republic, Miguel Díaz-Canel: the Afro-descendant Neighborhood Network community project devoted to fighting racism and racial discrimination, and Manuel Fajardo University of Physical Culture and Sports Sciences.

Díaz-Canel also attended a meeting at Latinoamericano Stadium with Cuban baseball players who are training for continental pre-Olympic games, where they will compete to classify for Tokyo 2021.

Behind the neon lights of 1950s Cuba

Counterrevolutionaries long for an era that never was

Whenever the media at the service of the U.S. government, the corporate press or the network of counterrevolutionary digital sites refer to pre-1959 Cuba, they paint a picture of a country that never was.

They present a magazine photo, something fit for commercial advertising, and since they are desperately attempting to sell us a return to that «golden era,» they must get rid of everything in their way, sweeping away, one by one, all the steps taken by the Revolution to uphold the dignity of the people, returning our fields and cities to the social reality overcome by the Rebel Army victory of 1959.

What was lurking behind the neon lights of Cuba in the 1950s?

Behind the commercial scenery ran the blood left by the Batista dictatorship’s crimes, committed by institutions that served as models for repression in Latin America, including the Bureau for the Repression of Communist Activities (BRAC), the Military Intelligence Service (SIM), the Naval Intelligence Service (SIN), the Maritime Police, the Bureau of Investigations and the National Police, true academies of torture and death.

Havana was a paradise, yes, but for the mafias controlling gambling, alcohol, drug and prostitution in a kingdom of impunity that grew as a «sin city,» alongside Las Vegas, with great advantages over the pearl of Nevada.

What happened in Havana stayed in Havana. There was no popular site without a drug stash, a gambling table, and prostitutes on hand.

Dazzling hotels and casinos were built with the country’s money, and the profits they generated were sent daily to the United States. It was a big «bisnes» thanks to Batista, the strong man who protected every scheme to fleece the people, using public financing for dirty businesses that were of absolutely no use to them.

Among the great public works that are featured today in anti-Cuba propaganda, allegedly indicative of the success of the bourgeois republic, many were based on corruption. State funds were given to companies owned by the regime’s authorities, who received millions of pesos for projects that cost thousands.

Batista reaped 35% of all «transactions,» that is, 35% of absolutely all spurious profits from corruption.

In this «marvelous» Cuba, thousands of people occupied positions in ministries and were paid without lifting a finger. This was the famous “free ride” instituted in the republic, appointments made as payment for favors, political commitments, etc.

While the capital was filled with casinos and dream hotels, cathedrals to deceit and fraud, the other side of the city lived in painfully extreme poverty.

Hundreds of miserable slums were erected. Las Yaguas, the Cueva del Humo and so many other destitute neighborhoods grew in the shadow of the new ostentatious constructions.

In the neighborhood of Las Yaguas, as can be seen in the magazine Bohemia, thousands of families lived in subhuman conditions, sheltered under palm fronds, used by the cigar industry to wrap tobacco leaves, and recycled as walls and roofs after they were discarded outside factories.

Girls from the countryside were tricked into traveling to the capital, to be exploited in the infamous prostitution belt that served hotels, casinos and cabarets.

The island paradise belonged to Meyer Lansky, Santo Trafficante, Amleto Battisti Lora, Joe Stassi, Amadeo Barletta and Fulgencio Batista; five capos, one president, all in one and the same mafia.

The Sicilian Santo Trafficante, second in command of the so-called Havana Empire, the visible head of U.S. mafia operations in Cuba, with his headquarters in the Sans Souci cabaret, beginning in the 1930s took charge of bringing in cocaine from the Colombian city of Medellin and heroin from Marseilles.

For these trafficking operations, they founded airline companies in Cuba that flew in and out of military airports, serviced with equipment and by technicians from the Cuban air force, protected by the army and the national police. Havana was also the most important money laundering center in the Americas.

The Cuba which the counterrevolution presents toady as «a developed country,» was more accurately documented in the 1953 census, which determined that 68.5% of campesinos lived in miserable huts with palm roofs and dirt floors, 85% had no running water and 54% lacked any type of sanitary services.

Only 11% of families consumed milk, 4% meat and 2% eggs; 44% were illiterate, and, according to the National Economic Council, some 738,000 persons were unemployed – in a population of six million.

Almost 3,000,000 Cubans had no access to electricity, since the infrastructure reached only 56% of the country.

When the Revolution triumphed, there were 600,000 children without schools and 10,000 teachers without jobs. One and a half million inhabitants over six years of age had no schooling, barely 17% of young people between 15 and 19 years of age received any kind of education and the population over 15 years of age had an average educational level below the third grade.

Only 20% of the arable land was cultivated, while 60% of the food was imported from the USA. More than half of the best land in the country was in foreign hands, and the properties of the United Fruit and West Indian companies stretched from the north coast all the way to the southern coastline of the former Oriente province.

According to data from Inter Press Service (ips), when the Revolution took power, the nation’s housing stock was seriously deteriorated, given the severe shortage of dwellings, notable differences between the countryside and the city, the variability of the materials used and the existence of poverty belts in the main cities, especially Havana. A 1953 study, coordinated by the U.S. Census Bureau, concluded that only 13% of homes could be considered in good condition.

In the capital, existing on the one hand was an ostentatious waterfront with exclusive bourgeoisie housing developments, luxurious apartment buildings and lavish residences, and on the other, huge areas of poor neighborhoods.

Given the conditions of economic underdevelopment that plagued Cuba, water resources were poorly administered. Of the 300 settlements with more than 1,000 inhabitants, only 114 had water distribution aqueducts and 12 had sewage systems.

At the beginning of 1959, 16 chlorination facilities were in operation and, of the four water treatment plants in Camagüey, Santa Clara, Palma Soriano and Cienfuegos, two lacked the required chemicals and one had not been operating for three years.

The only sewage treatment plant, located in Santa Clara, was abandoned, and sewage systems in Holguín, Guantánamo and Pinar del Río had been under construction for several years.

There were only 13 small reservoirs in the nation, located in Camagüey, Las Villas, Holguín and Santiago de Cuba.

This collection of facts, of course, does not match the commercial restoration presented by those who yearn for a return to the 50s, accepted by the naive who «swallow» the deception. Nor will they acknowledge that the cause of all this was Cuba’s status as a neocolony of the United States, a condition that plunged the country into the most brutal levels of underdevelopment and dependence, at the mercy of an oligarchy of military assassins, corrupt authorities and organized crime.

Nor will the restorers admit that the miserable reality suffered on the island was the driving force behind the warmth the people felt for the guerrilla insurgents in the mountains, fighting for a radical revolution in the country – the same Revolution that is today undefeated, heroically resisting, and aspiring to a prosperity obstructed by those who desire and invoke it, at the cost of selling the entire nation and our dignity, as was the case in the 50s they long for.