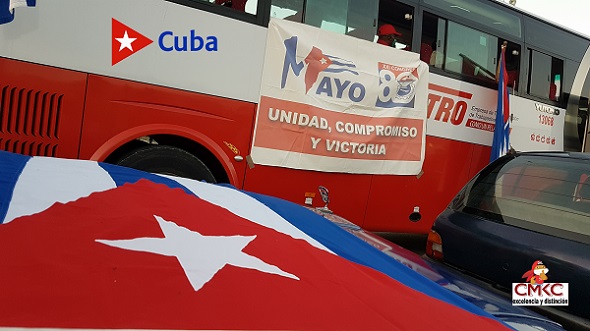 May Day: “Congratulations workers! What has been done to survive the pandemic under a tightened blockade, and nonetheless advancing, is monumental,” tweeted Party First Secretary and President Miguel Díaz-Canel, May 1.

“Congratulations workers! What has been done to survive the pandemic under a tightened blockade, and nonetheless advancing, is monumental. A hard-working, creative people like ours deserves a great tribute,” tweeted Party First Secretary and President of the Republic Miguel Díaz-Canel Bermúdez, May 1, who attended a simple commemoration of International Workers Day at Havana’s José Martí Plaza de la Revolución, with reduced participation given the COVID-19 pandemic.

After the National Anthem was played and the national hero honored with white roses, Political Bureau member and Secretary General of the Federation of Cuban Workers, Ulises Guilarte Nacimiento, congratulated the nation’s workers for their commitment and critical contribution to the construction of a living, united and victorious homeland.

Also in attendance were Prime Minister Manuel Marrero Cruz and other members of the Party, Political Bureau, government and trade union movement.

Cuban workers and families celebrated May Day virtually, on social networks, and in small gatherings in accordance with sanitary measures established, reaffirming the people’s majority support for the Cuban Revolution, and our continuing struggle for equality and social justice.

Another celebration of Cuban workers

Cuban workers- The fact that this May Day Cubans will remain behind closed doors, once again, with the same desire to march we felt in 2020, does not mean in any way that we renounce the celebration of International Workers’ Day, a universal century-old commemoration, which in Cuba is a massive event, to share with family and co-workers.