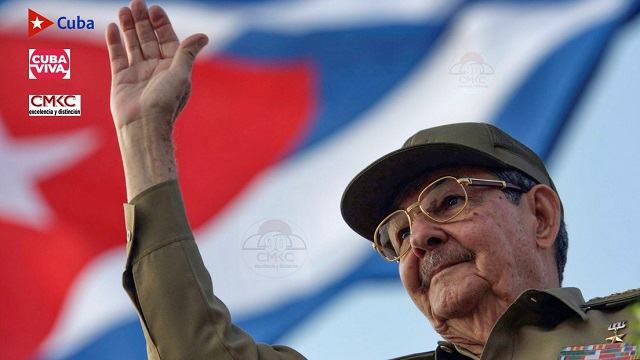 Compañero Raúl, who has prepared, conducted and led this process of generational continuity with tenacity, with no attachment to positions or responsibilities, a heightened sense of duty and of the historic moment, with serenity, maturity, confidence, revolutionary firmness, with altruism and modesty, on the basis of his own merits, authority and because Cuba needs him, will be consulted regarding the most important strategic decisions impacting the nation’s destiny. (Applause) He will always be present, well informed of everything, fighting with energy, contributing ideas and arguments to the revolutionary cause, through his advice, his guidance and alertness to any error or deficiency, ready to confront imperialism as the first with his rifle in hand on the front lines of combat.

The Army General will continue to be present because he is a reference for every Cuban communist and revolutionary. Raúl, as our people affectionately call him, is Fidel’s best disciple, but he has also contributed a great deal to revolutionary ethics, the work of the Party and to improvement of government

The work done under his leadership at the head of the country over the last decade is colossal. His legacy of resistance in the face of threats and aggression and in efforts to perfect our society is paradigmatic.

He assumed the leadership of the country in a difficult economic and social situation. In his dimension as a statesmanship, forging consensus, he has led, pushed for and encouraged profound, necessary structural and conceptual changes as part of the process of perfecting and updating the Cuban economic and social model.

Raúl was able to achieve the renegotiation of an enormous debt, honestly and respectfully abiding by the word given and the principle that the nation would honor its commitments to creditors, thus strengthening confidence in Cuba.

He led, with wisdom, the debate that culminated in a transcendental update of our Migratory Law; insisted on transformations in the agricultural sector; promoted without prejudice the expansion of non-state forms of economic management, the approval of a new Foreign Investment Law, the creation of the Mariel Special Development Zone, the elimination of obstacles to the strengthening of Cuban state enterprises, investments in the tourism sector, the program for the computerization of society, and the maintenance and improvement, to the degree possible, of our social conquests.

With patience and intelligence, Raúl achieved the release of our Five Heroes, thus fulfilling Fidel’s promise that they would return.

His trademark style was evident in wide-ranging, dynamic activity in the country’s foreign relations. With firmness, dignity and mettle, he personally led the process of talks and negotiations directed toward the reestablishment of diplomatic relations with the United States.

Raúl’s unquestionable qualities as a statesman, as a defender of Latin American integration, distinguished in a special way Cuba’s period as pro tempore president of CELAC. His most important legacy, the defense of unity within diversity, led to the declaration of the region as a Zone of Peace and contributed decisively to the peace talks in Colombia.

Raúl has defended the rights of Caribbean countries and particularly those of Haiti in international forums like no one else. With deep pride, Cubans listened to his emotional voice and precise language at the Summit of the Americas in Panama, where he recalled the true history of Our America.

He achieved these accomplishments while facing the illness and death of his beloved companion in life and struggles, our extraordinary Vilma (Applause), with whom he shared his passion for the Revolution and with whom he founded a beautiful family. During this period, he also suffered the illness and death of his principle reference in revolutionary life, who was also his boss and brother, compañero Fidel, to whom he has been uncompromisingly loyal. (Applause)

He put revolutionary courage and sense of duty before his human pain. He kissed the urn that held Vilma’s ashes and offered a military salute before the boulder bearing Fidel’s name, and led the country without rest, with success, energy and dedication. His contributions to the Revolution are transcendental.

The Raul we know, admire, respect and love, made his political debut as the leader of a group of young university students who in April of 1952 symbolically buried the 1940 Constitution, trampled by the March 10 coup; in January of 1953, he was one of the founders of the March of the Torches and in March of the same year he attended the International Conference on the Rights of Youth and preparatory meetings for the Fourth World Festival of Youth and Students. Upon his return, he became one of the Moncada assailants, becoming a leader in combat. He was then imprisoned on the Isle of Pines, participated in preparation of the struggle against the Batista’s dictatorship during his exile in Mexico, set sail on the Granma, was reunited with Fidel in Cinco Palmas, embarked on the struggle in the Sierra Maestra, and given his merits and courage, was promoted to Comandante and founded the Frank País Second Eastern Front, in an exemplary manner.

He is also the political leader who promoted debate on improving Party work, always demanding a strong connection with the people, with his ear to the ground. To him we owe decisive phrases and decisions at crucial moments for the country, such as that warning that «beans are as important as cannons» and the emblematic «Yes, we can!» which raised national spirits in the darkest moment of the Special Period.

The military chief of the Second Eastern Front who, amidst the war of liberation, undertook organizational and governmental experiences for the benefit of the population, which would later be extended across the country after the revolutionary victory. He directed for almost half a century the Ministry of the Revolutionary Armed Forces, making a decisive contribution to the independence of Angola, Namibia and the end of apartheid. At the same time, he was instrumental in achieving important results in the preparation of the country’s defense and in developing the strategic concept of the War of the Entire People. Under his command, the Revolutionary Armed Forces became the government’s most disciplined and efficient body, in which experiences

were organized that later served the country, including enterprise improvement, with its valuable concepts of administration, sustainability, efficiency and control, from which the FAR Enterprise System was born, going on to achieve remarkable results that contribute to the country’s economy.

Raúl, the guerrilla, in permanent contact and alliance with nature, acquired a special sensitivity to environmental issues, which would later mark his efforts to promote the water diversion program and Tarea Vida (climate change).

The Comanadante en jefe of the Cuban Revolution, who placed on the Army General’s chest the highest decorations, dedicated precise words to his work as a leader during the closing of the Fifth Party Congress. Speaking of his brother in blood and ideas, Fidel stated:

«Life has brought us much satisfaction and many emotions, much luck, and I can truly say that it has been a stroke of luck for our Party, our Revolution and for me, that we have had a compañero like Raúl, of whose merits I do not need to speak, of whose experience, capacity and contributions to the Revolution it is not necessary to speak. He is known for his tireless activity, his constant and methodical work in the armed forces, in the Party. How fortunate that we have had this.»

A Mambí “ready, with a foot in the stirrup, to defend the homeland”