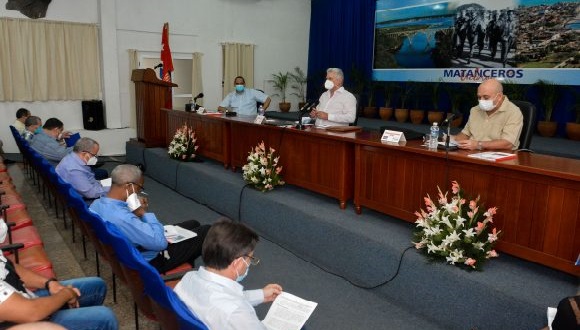 Honoring the 90th birthday of Army General Raul Castro Ruz with work to consolidate the agreements of the 8th Party Congress, the Central Committee Secretariat, led by its First Secretary, Miguel Diaz-Canel Bermudez, met with leaders of the organization in Villa Clara and Cienfuegos.

One idea prevailed during the meeting of the Communist Party of Cuba’s Central Committee Secretariat, led by its First Secretary, Miguel Díaz-Canel Bermúdez, with leaders in the province of Villa Clara: No matter how adverse the circumstances, there can be no problem affecting the people, the economy or society that does not have a solution.

To achieve this, we need a strong, united Party, which maintains close ties with the masses and has no other interests than those of the nation, Díaz-Canel emphasized, while dedicating the day’s work to Raul, on his 90th birthday.

As difficult as the debate may be, the first place to generate discussion is in local Party units, Diaz-Canel stated, while recognizing the validity of the provincial strategy and the report presented by Yudi Rodriguez Hernandez, first secretary in the province.

Party first secretaries in the municipalities of Santa Clara and Placetas, Dilky Ponce Expósito and Serguei Martín Guerra, respectively, presented their experiences in implementing agreements reached at the recent Party Congress, and the governor of Villa Clara, Alberto López Díaz, and leaders of the Federation of Cuban Women and the National Association of Small Farmers addressed their priorities.

Other members of the Secretariat highlighted, from their respective points of view, the value of a strong, respected Party in the current circumstances.

In Cienfuegos, Maridé Fernández López, first secretary of the Party in the province, and of Alexandre Corona Quintero, governor of the territory, explained how they are working in line with Congress agreements, and successfully meeting challenges in the industrial, agricultural and scientific fields.

The young first secretary of the Party in the municipality of Aguada, Maikel Betancourt Dueñas, stressed the importance of putting increasingly more tasks in the hands of young Cubans, illustrating this with the example of hundreds of students at the University of Cienfuegos who during the pandemic have undertaken tasks of significant social impact in the area.