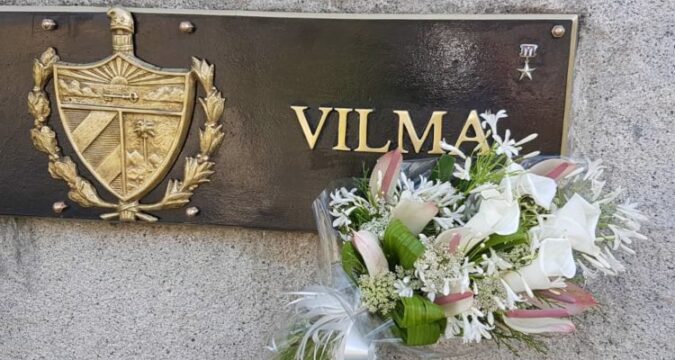 Photo: Santiago Romero Chang
On the 14th anniversary of Vilma Espin’s death, Cubans recall her as someone in love with life, who long after abandoning this world, continues at our side.

Death is a definitive word, but there are beings for whom it is hardly fitting, since dying means that something has ended. Vilma is among those who, in love with life, would give it up for her people, to live on in glory. Even after abandoning this world 14 years ago, she continues at our side.

We could say a great deal about what she did, about the girl from Santiago – the second Cuban woman to graduate in Chemical Engineering – who chose a path that took her away from a comfortable existence, to Revolution.

Among the many images that come to mind is that of the young student conspiring to put an end to a corrupt, subservient regime, who began writing pamphlets and went on to become a member of the Communist Party of Cuba Central Committee and Political Bureau and president of the Federation of Cuban Women, the FMC, a huge organization fighting for women´s rights and dignity.

Lucid and confident, her words shone just as brightly alongside Frank País, in the early days of the July 26th Movement, as they did in every struggle she undertook. She was indispensable in the underground; in the Sierra Maestra; in the educational mission she assumed within the Revolution, changing mentalities and challenging prejudices; on the international stage, where she defended Cuba’s revolutionary work; whenever she spoke, with the warmth of her spirit, on any subject.

She chose to live on the side of duty; overcoming fear in the face of horror, never trembling; participating in events that others would have avoided; building the first childcare centers with other FMC members; supported by the family she founded, to serve as an example of a woman in Revolution, speaking to us every time we recall all that we have achieved.

Vilma: The feminine force shaped by your teachings, which today defends Cuba in Revolution and our people’s irrevocable decision never to return to the past you fought, are more than enough evidence to confirm that your death is a lie.

Cuba for Vilma, on a clear mountain morning

Vilma,- At the foot of the monumental boulder that holds the ashes of the exemplary fighter in the underground and guerrilla struggles, within the Frank País Second Front heroes and martyrs mausoleum, the flowers were placed, alongside a wreath sent on behalf of the Cuban people, carried to the site by Lázaro Expósito Canto and Beatriz Johnson Urrutia, president and vice-president of the Provincial Defense Council.

President of the Republic Miguel Díaz-Canel Bermúdez remembered Vilma on the occasion, posting a comment on Twitter, «She was the Revolution dressed as a woman.

Her tender firmness in founding a work and a family, in organizing with women a Revolution within the Revolution, must serve as a permanent school in the Cuba she loved so much. A flower for Vilma Espín in her 91st year.»

Vilma, the Example of an Emancipated Woman

Whenever one recalls the most genuine values of this Cuban land, Vilma’s name comes up.

We all remember your tireless neat moves; and your warm smile reflects on all Cuban women, who as heiresses of your patriotism are determined to continue your work.

Vilma, what sense of duty did you have? What exceptional sensibility was in you? You gave yourself to others. You were a selfless, firm revolutionary woman that stood as a banner for all of us.

The marks that you left in the underground struggle, in the Sierra Maestra mountains, in every step of the female Cuban socialism are still fresh.

You never doubted that the definite triumph over the oppressors of this Island would be the necessary drive to put women in their right place in history, as leaders of the Revolution, as decision makers of their destiny.

Your morale was so high, so accurate your judgments and principles that your brothers and sisters in the struggle always respected you.

You always had a complete comprehensive vision of what the Cuba you and your colleagues dreamed of should be.

That is why you humbly became the voice of millions of Cuban women who identified you with Mariana GrajalesꞋ lineage and Anna Betancourt’s bravery and boldness, therefore a guide and inspirer of the most intense transformations for the full integration of women in society. We owe all it to you.

You received the most sincere love from your people, thus you will never die or be forgotten. You are a seed in the souls of young girls who dream with a bright future.

That is why when the leading female organization that you founded guided by Fidel is ready to celebrate one more anniversary we feel your presence in the air.

We are living hard times, the country calls us, and women respond: tireless in production, optimistic in laboratories, ready to fight viruses here and abroad, guardians of the family; they have definitely followed the slogan to think and act as a country. And that, Vilma, heroine, mother, revolutionary is thanks to your principles, your sleepless nights and total devotion for women’s dignity.