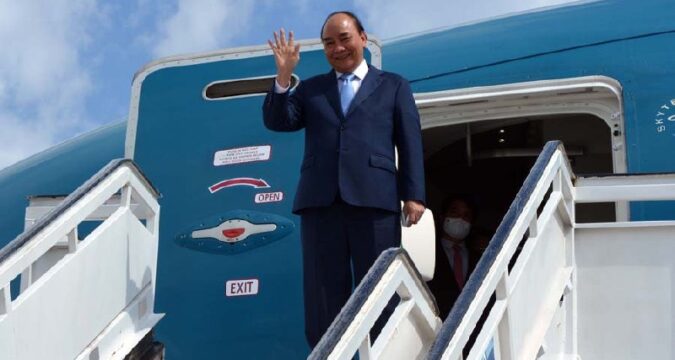 By: Santiago Romero Chang
Translation: MSc. Guillermo Rodriguez Cortes
The President of Vietnam Nguyen Xuan Phuc was seen off at the Antonio Maceo International Airport by the Vice Prime Minister Commander of the Revolution Ramiro Valdes and Beatriz Johnson, Member of the Central Committee of the Communist Party of Cuba, of the Council of State and Governor of Santiago de Cuba.

The city presented the distinguished visitor with a painting showing the city hall of Santiago de Cuba, from where Fidel Castro Ruz announced the triumph of the Cuban Revolution on January 1, 1959, as a pleasant souvenir of his stay in the Hero City of the Republic of Cuba.

President of Vietnam arrives in Cuba on official visit

The dignitary departed after paying tribute with floral wreaths with ribbons to the Historical Leader of the Cuban Revolution Fidel: «To the Commander in Chief Fidel Castro Ruz who lives in the heart of Cuba and his brothers in the world». The Vietnamese president also paid tribute to the National Hero of Cuba Jose Marti, the founder of our independence struggles and Father of the Homeland Carlos Manuel de Céspedes and the Mother of the Homeland Mariana Grajales.

During his official visit to Cuba, Xuan Phuc, in addition to the talks with the First Secretary of the Central Committee of the Communist Party of Cuba, and President of the Republic Miguel Díaz-Canel Be, the Asian leader toured areas of the Mariel Special Development Zone and the Center for Genetic Engineering and Biotechnology.

The delegation that accompanied the president exchanged with their Cuban counterparts and signed cooperation agreements between the two countries. Nguyen Xuan Phuc urged the ministers and businessmen of his country accompanying him to find key areas of investment that are effective and bring a practical benefit to the Cuban people, especially in goods for daily use, as well as cutting-edge technologies such as clean energy.

The visit of the Vietnamese leader in the current political, health and economic context is an expression of the strength of relations between Hanoi and Havana after more than 60 years and which constitute a living legacy of Ho Chi Minh and Fidel Castro.

Upon his arrival in Cuba, Nguyen Xuan Phuc President of Vietnam paid tribute to Ho Chi Minh and the unknown Mambi, also the Vietnamese President held a meeting with the Cuba-Vietnam Friendship Association where occasion he commented his excitement to learn that people over 90 years old are part of the solidarity group. He had words for young people and asked journalists to further promote the Cuba-Vietnam project.

He discussed business opportunities in the Mariel Special Development Zone, a tour of the Center for Genetic Engineering and Biotechnology, paid tribute to Marti at the Revolution Square Memorial in the capital, and followed with interest bilateral economic issues, as Vietnam is Cuba’s second largest trading partner in Asia.

Vietnamese President Nguyen Xuan Phuc had previously held a meeting with the Prime Minister of the Republic of Cuba, Manuel Marrero, where they assured their friendship will survive all circumstances; both parties expressed the determination to promote comprehensive cooperation, with emphasis on the joint confrontation to Covid-19.