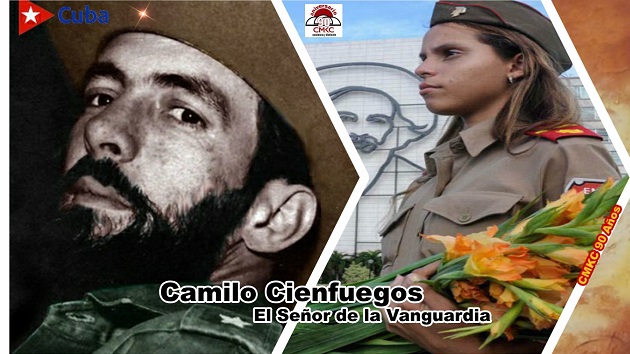 The Cuban people’s first tribute to Camilo Cienfuegos, pilot Luciano Fariñas and soldier Félix Rodríguez, after their disappearance during took place in the city of Cardenas, November 15, 1959, organized by the Youth Patrol.

At 6:00pm on October 28 that year, a small CESSNA 310 No.53 departed from Camagüey’s airport, heading to Havana, with Camilo Cienfuegos and his two companions aboard. They never reached their destination. The massive country-wide search that ensued was ended on November 12, without discovering the fate of the 27-year-old revolutionary, who after years in the guerilla struggle, lived only 310 days of the triumph.

This 28th of October, Cubans across the entire country will throw flowers into the sea and rivers to honor Camilo, though few know of the tradition’s origins.

Just three days after Comandante en Jefe Fidel Castro announced the end of the unsuccessful search, the people of Cardenas marched along the city’s central Céspedes Avenue to the coastline, to express their deepfelt loss of the man Ernest Che Guevara described as absolutely loyal to the people.

The municipal band led the march which included members of the Youth Patrol and veterans of the July 26th Movement. A Navy ship carried numerous floral offerings brought by the people out into the bay, a gesture recalling Camilo’s presumed disappearance into the sea.

María Teresa Clark, president of the Cuban National Union of Historians, emphasized in the magazine Bohemia‘s May 19, 2000 issue that it was Celia Sánchez who heard of the event, and proposed that it become a national tradition, moving the date to October 28.

A flower for Camilo

Alive in the historical memory of the Cuban people, Camilo Cienfuegos will always be remembered as an intrepid fighter, one of the original expeditionaries on the Granma yacht. His courage won him the title of Hero of Yaguajay, one of the key battles that sealed the 1959 victory of the Rebel Army led by Fidel

Alive in the historical memory of the Cuban people, Camilo Cienfuegos will always be remembered as an intrepid fighter, one of the original expeditionaries on the Granma yacht. His courage won him the title of Hero of Yaguajay, one of the key battles that sealed the 1959 victory of the Rebel Army led by Fidel.

From a modest Havana family, a tailor by trade, his jovial temperament, unforgettable smile, and heroic accomplishments in the Rebel Army, early on made him one of the Cuban Revolution’s most charismatic leaders.

In the Sierra Maestra he joined the José Martí Column 1, under the command of the Comandante en jefe, participating in numerous battles.On April 16, 1958, he was promoted to Comandante, to lead the Antonio Maceo Column 2, operating in a triangular area, between the important cities of Bayamo, Manzanillo and Victoria de Las Tunas.On December 31, 1958, at 6:30 pm, Commander Camilo Cienfuegos Gorriarán, immersed in the Rebel Army’s East-West invasion, signed perhaps the shortest and most moving report of his brilliant military career, sent to Che Guevara: Yaguajay has surrendered, I am counting the weapons, more than 350 rifles, 3 tripods, 1 mortar 81, a bazooka and equipment, see you tomorrow, Camilo.This small piece of paper, which, fortunately, history saved, reflected more than a week of bitter combat.After the triumph of the Revolution, January 1, 1959, Camilo’s activity was decisive in strengthening the Rebel Army, bringing the people together, uniting forces in support of the Revolution.Of those glorious initial days he stated: I went for the Revolution because I knew, I was very conscious that Cuba needed this Revolution, that Cuba needed not only the removal of the dictator, but that Cuba needed this Revolution that we have today, so that in Cuba someday there would be social justice…In the early days of the Revolution, he was appointed Chief of the Rebel Army General Staff, a responsibility that included neutralizing and arresting the traitor Hubert Matos, after an attempted uprising in Camaguey. The plane on which he was returning to Havana disappeared on October 28, 1959 and was never found. Since then, on this day, Cuban school children and the people throw flowers into the sea and rivers throughout Cuba, as a tribute to his life and work.