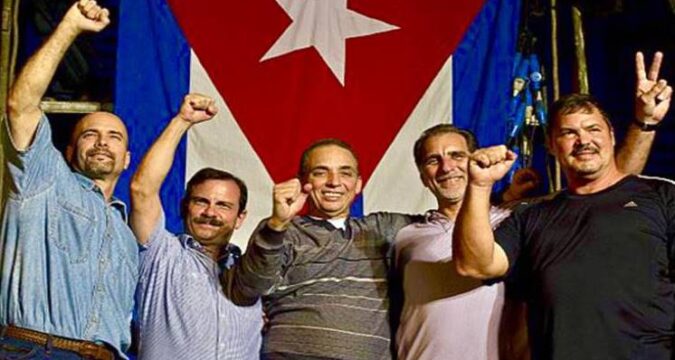 The 5- In his official Twitter account, Rodríguez praised the dignified resistance of each of them and said that with their return, the certainty of Commander-in-Chief Fidel Castro Ruz (expressed on June 23, 2001) about the return of those fighters to Cuban territory was fulfilled, leaving none behind.

«Seven years ago today Gerardo, Antonio and Ramón arrived in the Homeland. This finally confirmed the certainty of the Commander-in-Chief about the return of the Five Heroes, without leaving any of them behind. Their dignified resistance and the will of an entire people prevailed in the face of injustice,» the Cuban Foreign Minister published.

The Cuban Five, (The 5) as Gerardo Hernández, Ramón Labañino, Antonio Guerrero, Fernando González and René González were known worldwide, suffered severe sentences in the United States after an irregular legal process, allegedly for being part of an espionage network in that country, when in fact they were warning about carrying out violent acts against Cuba.

On December 17, 2014, millions of Cubans became witnesses to the fulfillment of the Commander-in-Chief’s prediction; with this, a battle that crossed oceans to become a solidarity movement in hundreds of countries came to an end.

Once in Cuba, they received the status of Heroes of the Republic and the Order of Playa Girón, in addition to the recognition of their people.