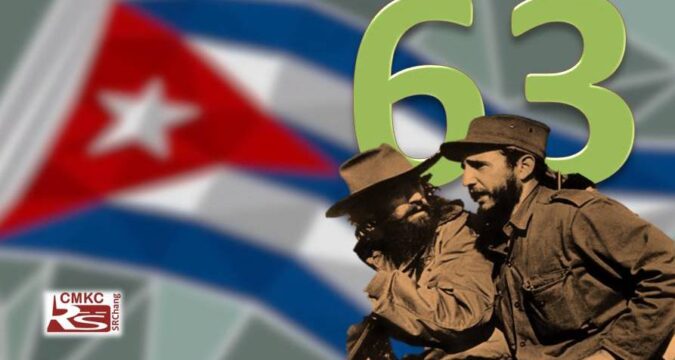 In the first days of November, Commander in Chief Fidel Castro assessed the political-military situation of the country and understood that the regime was facing a total crisis, so he decided to put into practice the Final Offensive of the Rebel Army, which he had been preparing since the beginning of August.

On November 13th, the airwaves of Radio Rebelde transmitted the instructions of the General Command to all the Chiefs of fronts and columns for the beginning of the «Offensive». On that occasion it indicated that the columns of the Frank País 2nd Front should continue their advance, encircling and surrendering all possible barracks in the area within the Mayari-San Luis-Guantánamo triangle, while the columns surrounding Santiago de Cuba should tighten the siege, preventing the least possible movement of enemy troops.

The rebel troops operating in the center and west, guarding the entrance to Oriente province, had to fight tenaciously against any enemy reinforcements they might try to send to the province.

The rebel troops in the province of Camagüey were to support the Battle of Oriente, intensifying the attack against the enemy means of transport in Camagüey, attacking in their rear the reinforcements they intended to send to this province.

The invading columns No. 2 and No. 8 of the Rebel Army located in Las Villas, gathering the support of all the revolutionary forces fighting there, should in turn, intercept the roads and railroads and prevent the crossing of enemy troops to the East and prevent those who remained with the tyranny from withdrawing and remain fighting at this end of the island, where they were virtually being overwhelmed by the rebel forces.

Already on November 11th, the Commander in Chief began his journey from the La Plata Command in the direction of the plains with the objective of taking the lead in military operations and initiating the Eastern campaign with the Battle of Guisa.

On November 20th, 1958, with the beginning of the Battle of Guisa, the uninterrupted offensive of the Rebel Army also began, which would not end until the defeat of Batista’s tyranny.

From that date on, all the war fronts fought intense combats, dislodging the enemy from their positions and isolating others, among them the combats of Arroyo Blanco, Maffo, Baire, San José del Retiro and Palma Soriano, in the territory of the I Front, together with the actions of La Maya, Songo, Cuneira, Soledad, Baltony, Alto Cedro, Borjita, Socorro, San Luis, Caimanera, Cueto and Sagua de Tanamo, among others, in the 2nd Front.

The combats fought in El Cristo, El Cobre, Puerto de Moya and Dos Palmas, in the Mario Muñoz 3rd Front and the combats fought by the forces of the 4th Front Simon Bolívar in Gibara, Tunas, Los Güiros, Velazco, San Agustin, Puerto Padre, Holguín and Chaparra, among others, reveal the impetuosity of the Rebel Army, and the gradual siege of the eastern capital and the main cities.

From the Battle of Guisa, the Commander in Chief assumes the direct command of the 1st and 2nd Fronts and in the course of the actions and the rebel advance, he punctuates and assigns new missions to the chiefs of fronts and columns and holds important meetings, as in the Rinconada de Baire, where the organizational procedures are clarified.

But the Offensive was not reduced to the Eastern Campaign, but as it had been conceived by the Commander in Chief in the central province, Commanders Ernesto Guevara and Camilo Cienfuegos, together with their columns and in cooperation with the Revolutionary Directorate also initiated the Campaign of Las Villas, which began with the liberation of Fomento, followed by Cabaiguan, Placetas, Zulueta, Sancti Spiritus, Guayos, Baez, Iguara, Meneses and Yaguajay.

Tthe actions carried out in the provinces of Camagüey, Matanzas and Pinar del Río, which together with the actions of sabotage and propaganda by the revolutionary forces throughout the country shook the already weak foundations of the dictatorship.

The U.S. Embassy, State Department officials and the CIA itself were aware that the hours of the March 10th regime were coming to the end and immediately set about the task of implementing a military coup and establishing a Civic-Military Junta that would give way to a provisional government, with the firm purpose of preventing the Revolution from triumphing.

An important role in the revolutionary triumph was played by the call for the General Revolutionary Strike and the support given to its execution by the workers’ movement and the Cuban people, demonstrating the importance given to this struggle and its use at the right time. The entrance of the Commander in Chief to Santiago de Cuba on January 1st, 1959, was the evident proof of the triumph of the Revolution, of the moral superiority of the Cuban workers’ movement and of the Cuban people.

The Battle of Santa Clara, conceived and directed by Commander Ernesto Che Guevara, contributed significantly to the triumph of the Revolution, and together with the order of the chief of the Rebel Army, to advance in union with Camilo towards Havana, consolidated the triumph and frustrated the coup maneuvers.

In its final structure, the Rebel Army managed to have eight fronts and one in formation, 25 columns and 10 detachments and guerrilla groups, and fought more than five hundred combat actions.

During the war, other relevant activities were carried out that strengthened the rebel forces in all orders, the list is extensive: creation of the Radio Rebelde radio station and the newspaper El Cubano Libre; Minas de Frio School of Recruits; creation of the Mariana Grajales Women’s Platoon; huge rearguard activity carried out by Celia Sánchez Manduley in the First Front; Meeting of the Directorate of the 26th of July Movement in Mompié where Fidel assumes the total leadership of the Movement inside and outside the country; peasant assembly in Las Vegas de Jibacoa; creation of the Peasant Committees; promulgation of the first Agrarian Reform Law and other rebel laws; Pedrero Pact, in which the unity of the revolutionary forces is agreed upon: 26 de Julio, Revolutionary Directorate and Popular Socialist Party; the Peasants and Workers congresses in the Second Front; sugar plenary in the territory of the Northern Front of Las Villas; functioning of the civil administration and the social economic organization of the liberated territories, activity in which the Second Front was an example in showing what would be the creative work of the Revolution in power.

The underground movement was a decisive support for the victory, and decisive in the war was also the peasant participation as combatants and collaborators; the Cuban woman was an example in the war, a group was integrated in the Mariana Grajales platoon and participated in relevant actions, others were collaborators or combatants in the plains and the mountains. In the Central Report to the First Congress of the Communist Party of Cuba Fidel Castro pointed out: The Rebel Army was the soul of the Revolution.