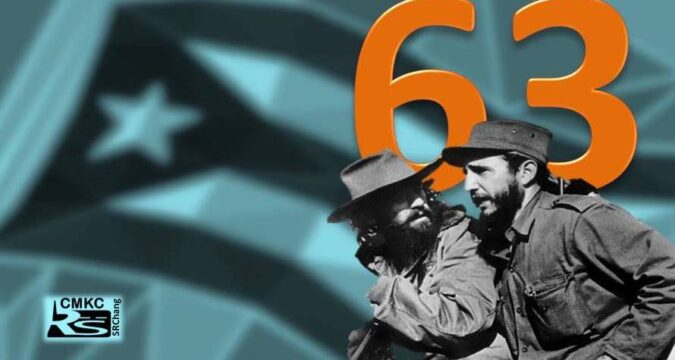 Image: Santiago Romero Chang
Santiago de Cuba.- In these December days when many Cubans remember those sublime moments when the Revolution triumphed on January 1st, 1959, when Fidel and his brave troops crossed a good part of the country to the euphoria of the people, it is not possible to forget the prominence of Santiago de Cuba in the epic.

There are thousands of sons of this heroic and hospitable land who had an outstanding participation in the total annihilation of the Batista dictatorship, so today, 63 years after that feat, those who defeated years of oppression and death deserve honors, because as our Jose Marti said: «All those who served are sacred».

One of those men is Cesar Enrique Garrido Perez and one of those facts that showed the bravery of the Cubans and propitiated the definitive triumph was the siege of Santiago de Cuba, a decisive strategic operation to give the final blow to the regime, led by the Commander in Chief of the Rebel Army Fidel Castro.

Garrido Perez recalls that on October 28th, 1958, the siege of the heroic city began with the Tanteo (Feeling) Operation by the 9th and 10th columns of the 3rd Eastern Front which, coming from the Sierra Maestra and surrounding hills, had been stationed in the vicinity of the city since the first days of that month.

«It was really a risky mission, since the rebel troops had only 200 weapons against an enemy of about 500 well-equipped men, including the troops of eight barracks located quite close to the Moncada regiment, such as Boniato, El Caney, El Cristo and San Luis», recalls the combatant.

«The fact of being in front of a city surrounded by mountain groups was very propitious to take strategic positions in the military order, thus it was possible to keep the railroad and road transport blocked by guerrilla forces, which forced the enemy to give the battle desired by the rebels when trying to break the siege.

«It was also decisive, he adds, the support of the heroic underground militias that operated within the city and that every day were reorganized, grew and strengthened in number and prominence, with the courage of their leaders and members and the valuable support offered by the people of Santiago».

Garrido Perez pointed out among the actions the sabotage, disarmament of the military, measures of support and securing of the guerrilla troops, as well as attacks on Batista’s people who stood out as torturers and assassins of young revolutionaries.

«The Rebel Army carried out the already mentioned Tanteo operation, as well as the Gancho (Hook) and Flor Crombert operations, which preceded Operation Santiago, which since the victory of the important battle of Guisa had been surrendering enemy garrisons and barracks on the road to the rebel city and definitive sovereignty.

Other maneuvers were the capture and liberation of the barracks of El Cristo, on November 26th 1958; Alto Songo, on the 18th of that month; La Maya, on December 7th, and San Luis on the 8th, while on the 14th a strong enemy convoy was defeated in Puerto de Moya, with a very favorable outcome for the rebel forces.

The interviewee emphasizes the courage of the combatants, without which it would not have been possible to overthrow an enemy much more powerful in men, weapons and equipment, but lacked the morale to contend and the ideals that we defended as sons of a people with a rich history and tradition of struggle that exceeds 150 years, he stresses.

«But today we continue in combat with the same impetus and passion, now against a threatening empire, with interference pretensions and that will never achieve its purposes of undermining our sovereignty and destroying Fidel and Marti’s Revolution», confesses César Enrique very excited.

«Fidel shone in those days, he recalls, just as he did in the whole emancipation process and after the triumph, he had his command post in Boniato and in his favor was his nobility and courage, in addition to the demoralized state and defeat spirit of the enemy». This revolutionary from Santiago, who is already 85 years old, feels proud of having been a protagonist of the epic that led to the freedom of Cuba, and in that same sense committed to take care of this beautiful work as the apple of his eye, to honor the martyrs and heroes and for the new generations to continue enjoying it and exalting it with their daily efforts.