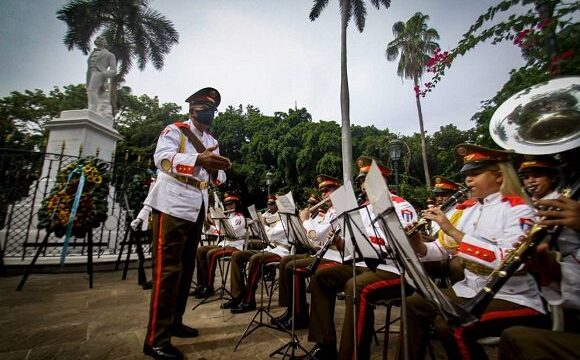 Translater: Guillermo Rodriguez Cortes
At the beginning of 1895, the atmosphere in Cuba was frankly insurrectionary. The failure of the Fernandina Plan, when the U.S. authorities seized the arms of the expedition organized by Jose Marti to restart the Necessary War, far from discouraging the independence fighters, raised the revolutionary spirit.

The chiefs inside the Island, anxious to return to the fight in the countryside, urged the Apostle to sign the order of the uprising with the argument that the colonial Government was already on notice and at any moment they could be arrested.

On January 29, Marti summoned Mayia Rodríguez, to whom Maximo Gomez had delegated his «express authority and power», and Enrique Collazo, who vouched for his authority, to evaluate the news and reports received from Cuba. Those gathered agreed on the need to issue the order for the uprising as soon as possible, which was written by Marti and signed by the three of them. In it, the simultaneous uprising was authorized, or with the greatest possible simultaneity, of the regions involved during the second half of February, but not before.

This decision was sent to the Cuban Juan Gualberto Gomez and in to all the groups of the West, with copies to Guillermon Moncada, in Santiago de Cuba; Bartolome Maso, in Manzanillo; Francisco Carrillo, in Remedios and to Salvador Cisneros Betancourt in Camaguey. The documents were carried to Havana by Juan de Dios Barrios.

In the first days of February 1895, in his condition of Delegate of the Revolutionary Party (PRC) in Cuba, Juan Gualberto received the already mentioned order of uprising and «others that he had to direct», according to his testimony. The young student Tranquilino Latapier left for [Oriente] to meet with Moncada, with the precise warning that only after obtaining the agreement of the general from Santiago, he could go to Manzanillo to see Maso. He succeeded and returned to the capital with the acceptance of the two eastern chiefs and an interesting proposal from Quintin Bandera: to set February 24th, the first Sunday of Carnival, as the date of the uprising.

Pedro Betancourt, a doctor from Matanzas, went to Las Villas to deliver Marti’s instructions to Francisco Carrillo. The latter refused to second the simultaneous uprising due to the shortage of weapons. But when informing Juan Gualberto by telegram, Betancourt wrote: «Carrillo well», which the Delegate of the PRC in Cuba interpreted as the mambi from Las Villas had accepted the date of the uprising. Camagüey, meanwhile, reiterated that it would not rise immediately. Neither in the order of uprising nor in the later document written by Marti or Juan Gualberto there is a place distinguished as the main center of the uprising. The plan always was for a simultaneous insurrection.

Days before the fixed date, the eastern mambi chiefs had abandoned their houses so as not to be located by the colonial authorities. Guillermon, for example, mounted on a mule, evaded the Spanish vigilance and went to the town of Auras where he stayed at the house of a patriot. On the morning of February 24, he left his refuge and with a group of patriots, camped in the Loma de La Lombriz, Alto Songo.

In his farm Colmenar de Bayate, near Manzanillo, at dawn, Bartolomé Masó raised the flag of the lone star and established a mambi camp there. Eighty insurrectionists rose up in Yara and entered the town brandishing their machetes; there they collected weapons. Near Bayamo, Joaquin Estrada Castillo rose up in his farm El Mogote; Esteban Tamayo, in Vega de la Piña with 80 comrades; Jose Manuel Capote, in San Diego, with 40 armed men.

Periquito Perez had precise instructions from Antonio Maceo to control with his people the south coast of the jurisdiction of Guantanamo, for the expeditions that were to disembark there. He had been hiding since October 1894 due to the persecution by the Spanish authorities, and then he received orders from Guillermon Moncada to set Guantanamo ready for war.