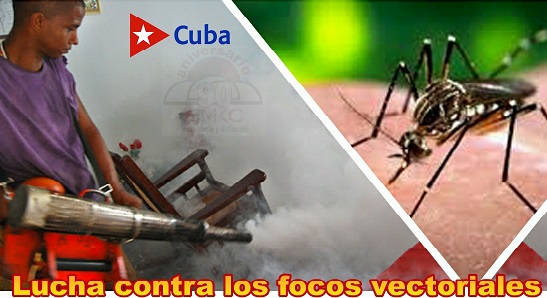 Many actions are being carried out by the agencies responsible for the control of these diseases; however, there are still environmental and social factors that favor the proliferation of the vector, such as garbage dumps, unsanitized ditches, stagnant waters, deficiencies in the collection of waste and the elimination of leaks, obstructions, and inadequate sanitary behavior of a large part of the population.

It is vital to increase the effectiveness of the antivectorial fight and to carry out simple actions at home to protect the family from this disease. The rains that these days cool the hot afternoons bring with them the proliferation of the mentioned vector, for which the whole population is called to search for potential vectors in a rigorous way and to maintain all the measures in the homes and work centers.

Osvaldo Castro, Master in Infectious and Tropical Diseases, pointed out that this ailment prevails in the country and there is danger that its incidence will increase in the next months according to its usual behavior. The also head of Medicine and Outpatient Services of the Pedro Kourí Tropical Medicine Institute (IPK), in Havana, explained that dengue is characterized by three phases: the first is the febrile phase that lasts from three to five days, with basic symptoms such as fever, headache, pain behind the eyes, in the lumbar spine and generalized discomfort.

From the second and fourth day onwards, a rash (skin eruption) may appear which most of the time behaves as a reddening accompanied by severe itching and is present in 30 to 40 percent of those infected. Taste disorders are also frequent, not its loss as in COVID-19, but a change described by many as an unpleasant taste, especially when drinking water; while complications occur later, in the so-called critical stage, after the fever subsides, around the third and fifth day.

The specialist pointed out that the most severe complication is dengue shock as a consequence of plasma extravasation (loss) and reduction of blood volume, for which the most effective treatment is to replace the loss of liquid.

In this regard, he explained that the impact and duration of the critical stage in the patient depends on the person’s risk factors and the clinical management of the case. The doctor said that it is essential to be aware of the warning signs that precede the critical stage, since they alert to the plasma leakage and contribute to its timely treatment: intense and sustained abdominal pain, frequent vomiting, irritability and unusual sleepiness -especially in young children-, fainting, mucosal bleeding and increased hematocrit (volume of blood occupied by red blood cells) are signs of severe dengue fever.

After these phases, he said, comes the recovery phase, where the organism improves, and may or may not go through a convalescence generally associated with chronic fatigue (known as post-dengue). The specialist insisted on the importance of going to health institutions, where the staff is trained to establish the differences and rule out the possibility of co-infection -suffering from both diseases at the same time-, which was previously manifested with influenza and is a possibility that increases if the transmission of dengue intensifies.