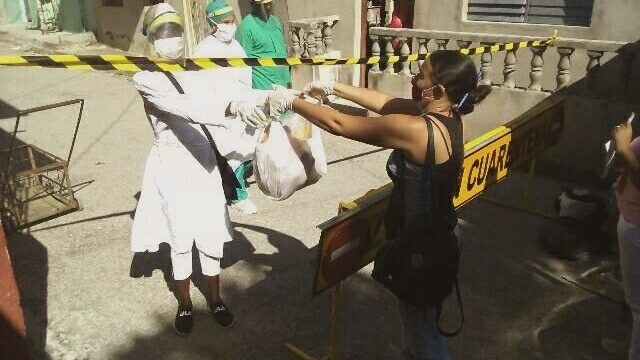 Land of men and women whom Army General Raúl Castro Ruz has called «champions over hurricanes, earthquakes and epidemics», Santiago de Cuba puts all its strength into sweeping away any trace that may contribute to the resurgence of COVID-19, through a restless battle.

Yes, «sweep, sweep, sweep», insistently repeats the first secretary of the Party in the province, Lazaro Exposito Canto, because like weed, SARS-COV-2 returns at the first opportunity, and more than an excess of confidence, and it was the irresponsibility of a few people in the Altamira neighborhood what caused its spread in that popular council.

Far from being left adrift, its inhabitants have immediately been accompanied by the authorities, health specialists and the people of Santiago, who even under the last rains of Tropical Storm Eta, took up the challenge with a quarantine that, at the end of the first two weeks, has managed to contain a situation that involved 30 new cases.

Behind the yellow and black ribbon that isolated them from the daily life of the city, Yunier Riquenes testified on the digital networks:

«I look out the window and see the doctors, nurses, young people who are taking food to the homes, and medicines to those who need them, the personnel of community services in the sanitation, and the police who do not abandon their posts”.

With sprinklers of the anti-vectorial fight, tankers from Aguas Santiago, the Fire Department, specialized equipment from Community Services and the Electric Company, supported by police officers, led by Virgen Alfonso, coordinator of the municipal Popular Power, converted the disinfection of that epicenter into the main direction of the fight.

Similarly, Elsa María Carrión, another executive of the municipality, whose Defense Council is also headed by two women, Niurka Bell and Yuneydis Hechavaría, took the responsibility of the sale of chicken, pork, oil, yogurt, food, fruit, marmalades, detergent, chlorine, hypochlorite and other products that were delivered to each home.

But due to the indiscipline of some residents or facilitated by violations involving international travelers, the virus was present in other parts of the city, where people are working to prevent events by intensifying active investigations, disinfection work, the PCR tests and surveillance in general.

As Cubans say, the fight is permanent. From the provincial level to defense areas, the epidemiological search continues to detect every contact of positive cases, and the isolation capacity increased in Ambrosio Grillo Hospital, Veguitas Campaign Hospital, Birret and Bahía Hotels, Language and Medical Sciences Faculties, and Pepito Tey Polytechnic.

“We know,» said Governor Beatriz Johnson Urrutia, «that there are comrades who are showing symptoms of tiredness, because in this fight there has been no truce, but we will continue to do everything necessary, because that provides security for our people, and prestige and confidence in the victory that all Cubans expect from the people of Santiago”.