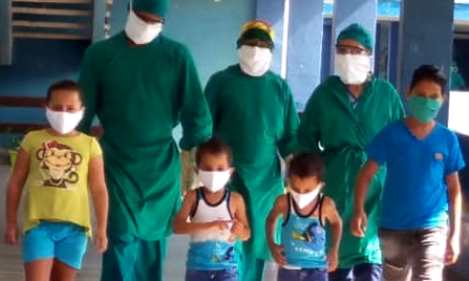 With the highest rate of patients recovered from COVID-19 in the Americas -94.2% as of March 20, according to the Ministry of Public Health (Minsap) – and two of its five candidate vaccines in the final stage of clinical trials, Cuba is consolidating its national strategy to confront the pandemic, with results that were recognized by the President of Bolivia, Luis Arce.

«We salute the sister people of Cuba, which despite the brutal blockade, is the only Latin American country that has two candidate vaccines in Phase III: Soberana 02 and Abdala,» Arce said, describing as admirable what the country has achieved in control of the disease.

The gesture was reciprocated by Cuban President Miguel Díaz-Canel Bermúdez, who expressed special thanks for Bolivia’s support in the fight against the U.S. blockade, while reaffirming the brotherhood that unites the two nations.

Precisely as another piece of news on Cuba’s progress against the SARS-COV-2 virus demonstrates, several institutions in Havana began intervention trials of Soberana 02 with 150,000 volunteers, on March 22, following approval from the State Center for the Control of Medicines and Medical Devices (Cecmed).

The information was published on the BioCubaFarma enterprise group’s Twitter account, along with other details and explaining that results collected will complement clinical efficacy data gathered in the phase III trials of Soberana 02, and allow for evaluation of the vaccine’s impact on reducing the incidence and dispersion of the virus within the population.

The trial will include an at-risk group of health workers in the biopharmaceutical industry in Havana and other sectors defined by Minsap.

A mother’s love for the homeland: Our five vaccines

«Abdala joins the vanguard, bringing us closer to Cuba’s immunization. I think once again of Fidel who created and foresaw this moment. And I think of Martí who said in verse: «mother’s love for the Homeland.»

“These are our five vaccines,» President of the Republic Miguel Díaz-Canel Bermúdez, said as phase III of the clinical trial of this candidate vaccine were about to begin.

On his official Twitter account, he noted that, after rigorous analysis, the Center for State Control of Medicines, Equipment and Medical Devices (Cecmed) had approved this definitive test, which will be conducted in the provinces of Santiago de Cuba, Granma and Guantanamo, where «48,000 volunteers will be putting their shoulder to the wheel for Cuba,» he said.

The news was confirmed in a press conference by specialists. Dr. Eulogio Pimentel Vázquez, vice-president of the BioCubaFarma enterprise group, emphasized the importance of Cuba having two candidate vaccines among the 20 in phase III clinical trials around the world.

According to Dr. Marta Ayala Avila, member of the Party Political Bureau and general director of the Genetic Engineering and Biotechnology Center (CIGB), efficacy results are being sought during this third phase, which began on March 22, while the safety and immunogenicity of the drug continue to be evaluated.

She specified that, in the eastern municipalities where this stage of the study is underway, some 20 clinical sites and 46 vaccination stations have been prepared, while volunteers between 19 and 80 years of age are to be included. The goal is to immunize the total pool of volunteers during the last week of March and the month of April.

Regarding the production of this vaccine developed by the CIGB, the general manager of AICA Laboratories, Antonio Vallín García, stated that the company has three production lines, and a fourth is in the process of construction, making for a manufacturing capacity of close to 46 million vials, which means many more guaranteed doses.

Cuba and China developing a pan-corona vaccine, to control new strains of the virus

China and Cuba are working on a vaccine, called Pan-Corona, which will be effective against different strains of the SARS-COV-2 coronavirus and prevent COVID-19, as confirmed at a March 22 press conference.

The Xinhua news agency specified that Chinese scientists and Cubans from the Genetic Engineering and Biotechnology Center (CIGB) are developing the product in a facility opened in the central city of Yongzhou, Hunan province, specifically for research projects involving the two countries.

Gerardo Guillen, director of biomedical research at the CIGB, told the media that the study was requested by the Chinese, and, PL added, the research is based on combining parts of the virus that have been preserved, and therefore less prone to variation, to generate antibodies, directed toward a cellular response.

«This is a strategy that could protect against epidemiological emergencies caused by new strains of the coronavirus that could exist in the future,» he said.