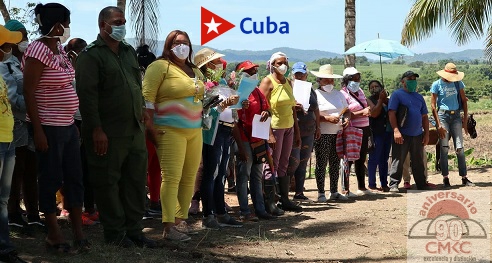 National Programme- Gender equality will remain a pipedream in our country without political will – practical undertakings. Leaders can read speeches, devoid of action it will all be rhetoric.

José Marti once said, “The best way to say is to do.”

We are encouraged by Cuba’s action to decree women advancement. President Miguel Díaz-Canel last week signed a decree establishing a national programme for the advancement of women. The programme addresses seven key areas that include economic empowerment.

“Once more, the Cuban Revolution has shown that respect for women and their dignity holds one of the highest places among its core principles, along with equal opportunities for their advancement,” Diaz-Canel said.

“This programme is based on the rigorous observance by the Cuban State of the international agreements and instruments for women’s rights while taking into consideration the challenges presented in the assessments of the action plan of the Republic of Cuba monitoring to the fourth conference of the UN on women.”

The core elements included in the National Programme for the Advancement of Women include, the position and political willingness of the Cuban State, which is the cornerstone in the creation of policies in favour of women.

The programme also continues to work for the advancement and development of gender equality in the country and institutionalizes this right.

“It is the agenda of the Cuban State for the advancement of women and it corresponds with the principles and postulates established in the Constitution of the Republic and in the new scenario of update of the Cuban Economic and Social Model of Socialist Progress, and with the international commitments on gender equality signed by Cuba,” the decree states.

“It promotes actions to achieve greater comprehensiveness and effectiveness in the prevention and elimination of manifestations of discrimination against women, strengthens the mechanism and the professional capability of public servers and officials so they can add the questions of gender in the creation of policies, programmes and in rendering services.”

The decree adds that “this is a government programme, which with the participation of the Federation of Cuban Women (FMC), promotes and ensures monitoring, assessment and tracking of actions and comes in response to recommendations from the committee for the elimination of all forms of discrimination against women”.

What Cuba is doing deserves attention and also admiration. We say so because years back, Debra Evenson, in a US journal, noted that; “Only when women are fully integrated into the decision-making institutions and processes can we speak of full equality. Cuba is no different in this regard, but the Cuban experience may offer some promise.

The advancement toward women’s equality in Cuba has often been referred to as the ‘revolution within a revolution.’ In fact, women’s incorporation into the economic and social life of the country has been impressive.”

Gender equality deserves serious attention. We cannot perpetuate this inequality anymore. Women deserve the same dignity and rights that every human being must and is accorded. A woman is not a lesser being than man. It’s time for affirmative action, in deed and not in words.

We must come to a realization that even this political independence is a fallacy if women, who constitute the biggest portion of our population, cannot effectively influence policies and decisions in the da-to-day running of government and other institutions.

After all, there are a lot of women in our country with higher leadership qualities than men. For example, we know some men in our parliament who have never contributed sensible debates, they just murmur all the time.

Cuba’s greatness in the name of a woman

On the other hand, our women have vigorously pleaded the cause of people from their constituencies. So, it is time our government developed a deliberate and proactive programme to empower our women at all levels.