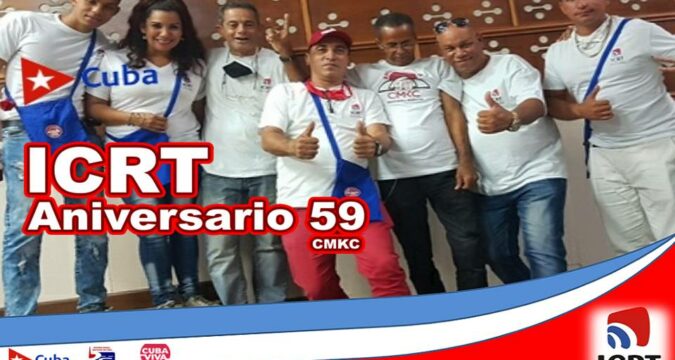 Image: Santiago Romero Chang
Since her husband bought the German VEF radio, she prepares lunch every day while listening to it. Within 3 kilometers around, the Perez Delgado family was the first to have a radio in the 1930s.

The Cuban Radio and Television History

The cooker is already pressurized. The smell of black beans seasoned with chili bell pepper and garlic can be smelled from the doorway. The mortar is on the kitchen table next to the radio. Bertha doesn’t miss a single episode of the radio soap opera.

Television came later. Since 1955, the neighbor across the street opened the doors of her house every weekday for the boys on the block to sit on the curb and watch the 7:00 p.m. live adventure show before nightfall. Estelvina was a very noble woman and she knew that children loved that show. At that time it was not at all common to find a television set.

According to Bertha, an octogenarian woman from Ciego de Avila province, who lives in Havana, «the radio boom in Cuba had trapped people since the 1920s, but even so, the power of the image attracted the attention of the younger ones».

To be able to see stories recreated on the small screen or to be informed about the most sought-after soap brand of the moment was an event in the first half of the 20th century. Therefore, the reception process is also part of the construction of the history of the audio-visual media in the Island, if we want to talk about it.

Most families in the country listened to radio. A very specific sector in the early 50s watched television because the rest did not have access to it. The entry of both media into national homes depended on the salary earned and the attitude in the workplace. Consuming a certain product was a matter of class.

The foundation of the Cuban Institute of Radio and Television (ICRT) on May 24, 1962 constituted not only the displacement of the power of the big republican media consortiums, in part, but the democratization of the information that through Cuban radio and television reached the homes of families.

The main objective of the institution under the revolutionary government was to disseminate and guide the broadcasts of both media for the entire national territory, through a programming that carried «high political, ideological, social, ethical and aesthetic virtues, at the service of knowledge, culture, recreation and the defense of the most sacred values and interests of the Nation and all its citizens», according to the then resolutions.

From then on, with a much more organic and coherent structure than the previous one, the spaces transmitted from the studios and recording booths were received at a slightly higher level than in previous times.

During the 1964 vacations, a television set arrived at Bertha’s house. And although everyone in the neighborhood did not have this equipment, she, her neighbor across the street and the teenagers in the surrounding areas could enjoy both the adventures and the soap operas. The lady, who now has gray hair, remembers that, despite the arrival of both signals at the same time, she continued to cook beans every noon in the heat of the radio waves.

We deeply appreciate the effort and sacrifices made by our professionals, technicians and support staff during all these years, especially in times of pandemic, to make possible the Radio and TV transmissions.

They are fundamental factors in the accompaniment of our media to the citizens. Complying with the mandate of the country’s top management in the media field has been and continues to be a guideline in the work of the Institute.

Our workers have been able to combine the mission of informing with that of entertaining and supporting distance education, in the midst of the difficult circumstances the country is going through. On behalf of the Presidency of the ICRT, we congratulate them.