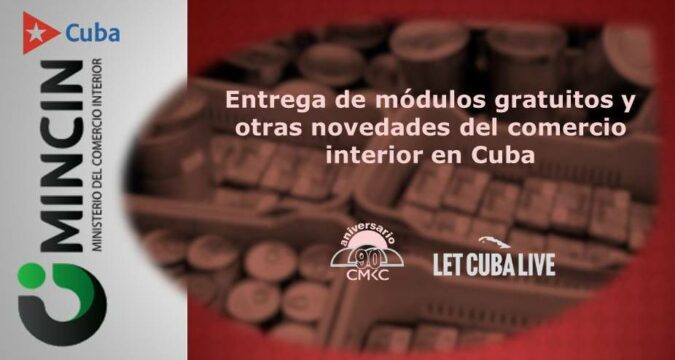 Photo: Santiago Romero Chang
Cuba, Jul 30 (ACN) The gradual and free delivery to the Cuban population of food sent by friendly nations will begin this Friday in several municipalities, on a day in which new donations of food and sanitary material to face the COVID pandemic and the impact of the U.S. blockade are also expected to arrive in Cuba.

Through La Lisa, in the capital, will begin the distribution of the module composed basically of rice, grains, pasta and sugar, which will be received throughout Cuba by the more than 3.8 million families registered in the Consumer Registry Offices, as announced on Wednesday by Betsy Díaz Velázquez, Minister of Domestic Trade.

Consulted by the Cuban News Agency, Humberto Cardoso, director of the Trade Enterprise in Havana, said that the first deliveries will be made in 18 warehouses in that locality, a task in which its workers will be accompanied by the organizations and factors of the neighborhood, especially to take the donation to the homes of vulnerable people.

Also from today, Friday, the inhabitants of 15 of the 18 Popular Councils of the municipality of Pinar del Río will benefit, by households, with the delivery of canned meat, and those of the entire province of Cienfuegos with a pound of oil per house, although this process will now begin in the mountainous locality of Cumanayagua, according to Cuban television.

Local media highlight the transparency in the operations of the port-transport-internal economy chain, the safety and security in the warehouses where the valuable cargo resulting from international solidarity is kept; and the agility and organization in the prompt dispatch, in the preparation of the modules and in the transportation of these and other foodstuffs that some territories will punctually receive.

Today at 7:00 pm at the Informative Round Table, the head of Mincin will offer further details of the important process, which in social networks, in the streets and in many other spaces has been very well received by the population, with expressions of gratitude to the countries that in this crucial hour for Cuba are helping it with food, medicines and other necessary supplies.

Rodrigo Malmierca, Minister of Foreign Trade and Investment, said on Thursday that while the U.S. government tightens the economic, commercial and financial blockade against the Caribbean nation, it continues to receive solidarity aid from various nations of the world.

In his official Twitter profile, Malmierca highlighted that donations from Venezuela and Russia have already arrived in our country, and new arrivals from Mexico, Nicaragua, Bolivia and China have been announced. We are not alone, the official stressed.

Bolivia, Mexico and Nicaragua sent donations to Cuba and led the solidarity actions in Latin America with the Cuban people, while from Russia last Sunday two aircrafts arrived in Havana with 88 tons of food and protective equipment, including one million medical masks.

Vietnam donated on Thursday 12 thousand tons of rice, which should soon arrive in the country, to help it face the complex situation it is facing.