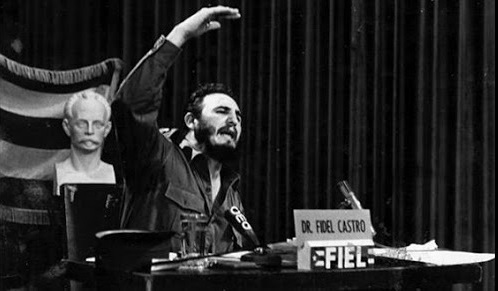 In the country- On Fidel’s 95th birthday, in a 2021 full of challenges, a pandemic and a criminal blockade, the Comandante en jefe returns «on battle footing,» in this great struggle for life.

Fidel is always present, with his example, with his ideas and actions, in the country’s every heartbeat. In times of adversity and of times of victory.

Now, on his 95th birthday, in a 2021 full of challenges, a pandemic and a criminal blockade, the Comandante en jefe returns «on battle footing,» in this great struggle for life, guiding the generation of continuity, correcting the course of the work we are constructing.

From the sacred boulder, where his physical remains rest, he accompanies his brothers and sisters in combat, in the Sierra and on the plains, and his younger followers, who apply his teachings, offering, first and foremost, his example of always being close to the people, listening to them, convoking them, sharing the truth, building confidence in victory.

The Comandante of ideas and action is the Fidel Cubans know, recognized and respected around the world.

As fate would have it, his 95th birthday coincides with the most terrible pandemic seen in centuries. During this difficult journey for Cuba, Fidel, as always, has been present, every day, every hour – a light.

Fidel foresaw these times. He was the architect of a scientific infrastructure that today provides an urgently needed response. Cuba, without the slightest self-congratulatory rhetoric, is the only country in the Third World that has been able to conceive and develop five candidate vaccines – one already a recognized vaccine – to immunize the entire country this year and share with other peoples.

His presence is a living force in every testimony of a grateful Cuban, from the campesino in the Sierra Maestra, vaccinated with Abdala very close to his land, who exclaimed on television, «Thank you Fidel,» to the parents of a small girl in Camagüey, who expressed similar words when their daughter became one of the first children to receive a dose of the immunogen, as part of clinical trials in the pediatric age group, a study still pending in almost all countries producing vaccines.

Fidel understood, like few others, the intricacies of how a poor, blockaded country, with little industrial development and a legacy of colonial backwardness, would be able to undertake one of its most colossal battles: to become a country of science.

He not only internalized and helped others understand the need to prioritize the training of men and women who, perhaps illiterate in 1959, could be the seeds watered during the Literacy Campaign, whose children and grandchildren, with new schools and fabulous teachers, would learn that only with education could the Cuban nation become the country imagined in the Moncada Program.

When Fidel said, «The first thing we must save is culture,» he synthesized in this expression how much culture lies within education, science, humanism, solidarity.

Once the first scientists were trained, the Comandante en jefe went for more: constructing scientific research and development poles, with modern facilities and state-of-the-art technology, with laboratories and industrial plants to produce drugs, vaccines and even equipment manufactured only in the so-called First World, denied to Cuba on orders from imperialism.

Well before the pandemic had spread to our archipelago, the continuators of his work, the hundreds and thousands of graduates from our universities, were charged with developing plans and protocols to confront the virus, without abandoning the other battles of a nation that is determined – by Fidel’s own mandate – to «change everything that must be changed,» to be better.

A number of expressions of this gratitude were also heard recently from the other side of the world, when in faraway Tokyo, our Olympic champions dedicated their medals to the memory of the Comandante en jefe, recognizing him as the driving force behind our current sports development. He was remembered, euphoric and proud, when, after each victory, Party First Secretary and President of the Republic, Miguel Díaz-Canel Bermúdez, personally called the medal winners, often during the dawn hours in Cuba, and congratulated them on behalf of our people, just as the leader of the Revolution did.

There will be no other commitment to this Fidel than that of defending and perfecting the great work he bequeathed to us.

As difficult as it may be, this 2021 will continue to be another year with Fidel, a year of resistance and victory. His example, today and always, remains and summons us.