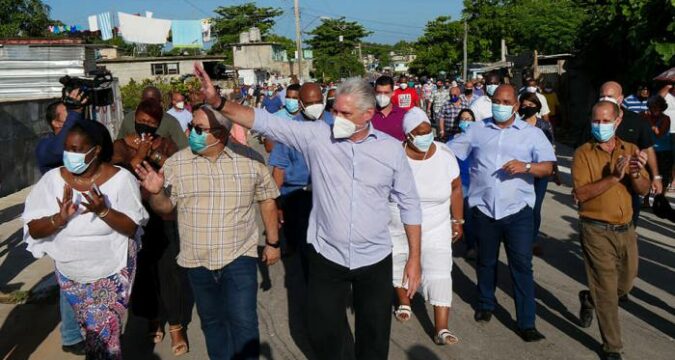 Translation: MSc. Guillermo Rodriguez Cortes
Created by Fidel to safeguard, with popular participation, the freedom of the homeland, the Revolution and the achievements of socialism, the Committees for the Defense of the Revolution (CDR) proclaimed that, with unity and the legacy of our heroes and martyrs as their main weapon, they will defend the tranquility of the citizenry and the right of all to live in peace at whatever cost.

In their statement they denounced the values and tributes longed for all over the world, which are today threatened by the destabilizing actions of those elements lacking ethics and social coexistence, encouraged from the United States and by spokesmen who, in some cases, have gone to the extreme of demanding for a military invasion of our Island.

«We will never kneel down before an empire that for more than 60 years has subjected us to the most criminal blockade in history, precisely in the hope of surrendering because of hunger, needs and desperation. We know that we still have a long way to go to build the Cuba we long for, the one dreamed of by Marti, Fidel and Raul, the one our children deserve.

The CDR, Stronghold of Cuba

«We, the CDR, strongly and unequivocally condemn the vandalism of last July 11. Juarez said that respect for the rights of others is peace, and the right of some citizens to express their complaints and disagreements cannot infringe on the right we all have to live in order, without fear or violence in our neighborhoods.

«We are heirs of those mambises (independence fighters of the 19th century wars in colonial Cuba) who fought against an imperial power, and whose blood runs in our veins calls us to defend the Revolution, with the same dedication with which we will continue working to solve our problems, to strengthen social work and reach the heart of those communities where there are problems, to listen to the legitimate complaints of our compatriots and to make our society increasingly fair and inclusive.

«Let no one doubt that, as Marti said: ‘In Cuba there are more mountains than abysses: more those who love than those who hate’.»

«From the wisdom, from the emotion, from the responsibility and commitment of Cuban women, we ratify that we defend the Revolution, for our sons and daughters, for the brave women who preceded us in our struggles, because this Revolution was made by the humble and for the humble, because it is perfectible and never abandons its people in the most difficult moments,» reaffirmed the Committees for the Defense of the Revolution.

The CDR, Stronghold of Cuba

On September 28, 1960, in the face of the maneuvers of imperialism, which sought to destroy the blossoming revolution, sowing terror through sabotage to weaken the country’s economy, Fidel Castro, from the balcony of the then presidential palace (today the Museum of the Revolution), delivered one of the most moving speeches of the Cuban Revolution.

Fidel Castro, from the balcony of the presidential palace (today the Museum of the Revolution), delivered one of the most moving speeches.

On this occasion, the leader explained the need to create a massive organization to confront such a vile fabrication. The people, far from being intimidated, supported the initiative of their leader, thus the Committees for the Defense of the Revolution (CDR) were born.

Over the years the organization has incorporated new tasks in favor of the Revolution and the community. Examples of these are blood donations, volunteer work and in these times of pandemic, new missions have arisen that highlight one of the virtues that characterizes our people, «solidarity».

As the elderly are the most vulnerable people, support brigades have been organized to bring basic commodities to their homes; another task, in these times of need intensified by the cruel blockade, is the preparation of community vegetable gardens to guarantee food for the neighbors and to take advantage of all the idle land nearby.

Fidel’s words during the first three years of the CDR:

4.»…That when the enemy launches his attacks again, not only will he find a stronger army and militia , but he will also find that he will have to fight with a much stronger revolutionary organization of the Committees for the Defense of the Revolution!» (Fidel,28/9/61.First Anniversary of the CDR)