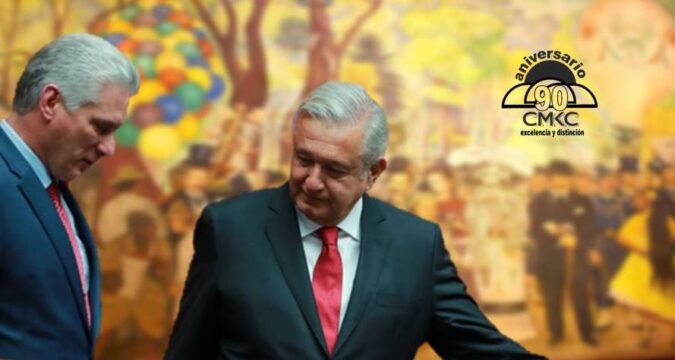 Mexico’s Andres Manuel Lopez Obrador confirmed on Thursday the existence of an accord with Cuba to purchase COVID-19 vaccines developed by the island nation.

Cuba’s medicine will be tested in the US, Mexico and Brazil

In his usual press conference the Mexican President said his country and Cuba enjoy cooperation relations particularly in the health sector.

During Mexico’s civil-military parade marking the 211 anniversary of the beginning of that country’s independence war on September 16, Cuban President Miguel Diaz-Canel stressed the historic bonds of friendship between the two nations.

Diaz-Canel meets with a group of Cubans living in Mexico

Miguel Diaz-Canel, first secretary of the Central Committee of the Communist Party of Cuba and president of the country, met today with a group of Cubans living in Mexico, where he arrived in an official visit on Thursday.

According to the Twitter of the Presidency, in the meeting, where they talked about solidarity and love for Cuba, the head of state assured that the commitment to hold the 4th Conference of the Nation and Emigration in Havana is maintained.

In this regard, Anayansi Rodriguez, Cuban deputy minister of foreign affairs, highlighted on the same digital media the exchange between the president and his fellow countrymen in Mexico took place at the Cuban embassy to that country.

«Emotional and patriotic exchange between Cubans who love their homeland, build, work, build bridges and put their hearts into Cuba,» she tweeted.

She added that outside the venue several people showed their support to the Homeland, whom she thanked.

Rodriguez accompanied his message with images showing posters welcoming Diaz-Canel to that country, another one demanding the elimination of the U.S. blockade of Cuba, and images of Fidel Castro.

On the list of participants, in which he includes the agreement with Argentina to jointly produce AstraZeneca, Ebrad refers to the Cuban vaccine, which he has already mentioned on other occasions when referring to the commitment to support the production of vaccines among members of the Community of Latin American and Caribbean States (CELAC).

He noted that COFEPRIS on Monday reported that the New Molecules Committee (CMN) gave a favorable opinion on the authorization for emergency use of Abdala.

The vaccine was presented by Neuronic Mexicana S.A. de C.V. in conjunction with the Center for Genetic Engineering and Biotechnology (CIGB) of Cuba.

COFEPRIS explained that the Cuban vaccine is made with the recombinant protein of the SARS-CoV-2 virus receptor binding domain, responsible for the Covid-19 disease. It pointed out that this is the first Latin American Covid-19 vaccine to be authorized by this committee and the favorable technical opinion is an advance in the approval processes necessary to comply with the quality, safety and efficacy requirements, which are indispensable when considering a product, the text clarified.

It indicated that the next step consists of the submission of dossiers by the pharmaceutical company, which will be reviewed by expert personnel from the Health Authorization Commission.

The Cuban president is currently on an official visit to Mexico, which will last until tomorrow, when he will participate at the 6th Summit of the Community of Latin American and Caribbean States.

Diaz-Canel meets with a group of Cubans living in Mexico