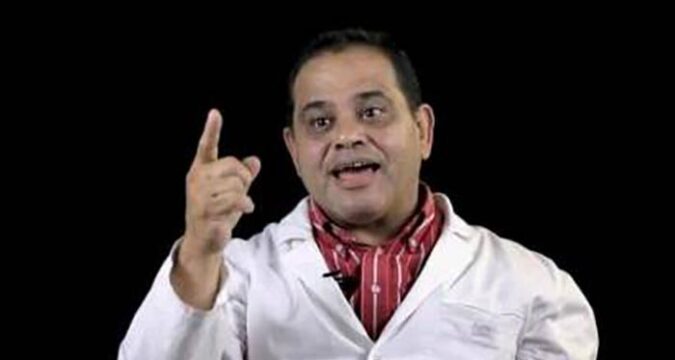 Fernando- «Yunior is seeking a confrontation with the Armed Forces and Minint, we are seeing in him the creation and actions of a counterrevolutionary,» stated Dr. Carlos Leonardo Vazquez Gonzalez, on the Cuban television program Razones de Cuba, and he has the evidence. He knows that the objectives of the marches being promoted to take place November 15 are not as transparent as presented, and his actions are not isolated, or spontaneous.

Dr. Vázquez González, who for more than 25 years has been State Security agent Fernando, participated in a September 2019 workshop euphemistically entitled “The role of the Armed Forces in a transition process,” sponsored by the Madrid branch of Saint Louis University, also attended by Yunior García Aguilera, who is promoting the marches despite being informed by authorities of their illicit nature.

A Cuban in a silent trench

We have a homeland and we defend life! And remain committed to Homeland or Death!

«That workshop was part of a project conducted by experts from different parts of the world; behind it are many organizations financed by the United States to overthrow the Cuban Revolution, such is the case of the National Endowment for Democracy (NED),» the doctor noted.

At this event, Richard Youngs, an expert from the Washington-based Carnegie Endowment for International Peace, gave a lecture on new forms of civic activism, espousing an approach directed toward the establishment of fundamentalist, privatizing capitalism, taking advantage of the population’s dissatisfaction, a strategy that has left its mark in countries like Venezuela, Nicaragua and Bolivia.

According to Dr. Vázquez, participants in the workshop were mostly Cuban journalists, doctors and historians, along with Felipe González Márquez, leader of the Spanish Socialist Workers Party and President of the nation for 14 years, who in 1983 created the so-called Anti-Terrorist Liberation Groups, responsible for kidnappings, torture and murders in that country.

Another of those on hand was Manuel Cuesta Morúa, who since 2014 has worked at the service of the NED, and orchestrated provocative plans to disrupt the Community of Latin American and Caribbean States Summit in Havana, and the Summit of the Americas, in Panama, in 2015.

But this was not the first time Yunior García Aguilera participated in a meeting of this type and as a political agent. In 2018, he was in Argentina, in an event coordinated by the project Tiempo de Cambios (Changing Times), addressing the role of the Cuban Armed Forces in a transition (regime change) process.

The course objectives are made clear on Torcuato Di Tella University’s website. Listed, for example, are giving continuity to the study of the Revolutionary Armed Forces (FAR) to identify possible scenarios and future allies; cooperating with Cuban activists, to build ties with members and former members of the FAR open to processes of change. It was at this meeting, according to agent Fernanado, that García interacted with academics Ruth Diamint and Laura Tedesco, architects of the Dialogue on Cuba project, the latter also Richard Youngs’ spouse and an activist devoted to destroying the Cuban Revolution.

Garcia’s behavior during the July 11 events, in front of the Cuban Institute of Radio and Television, serve as a precedent warning of what could happen during the November 15 marches. He demonstrated that he follows the U.S. non-conventional warfare manuals to the letter, tried and tested in countries like Venezuela, the former Yugoslavia and Nicaragua.

Media campaigns are key to undermining confidence in our government and its policies, strengthening the morale of insurgents and gaining sympathizers. Another aspect of the soft coup strategy is the recruitment and activism of cultural figures to generate destabilization. Thus his cover as a playwright allows García to fit perfectly in the role as a promoter of the provocative November 15 marches.

The strategy is not new; García is only trying to remake an event that took place three decades ago, when on a similar date the playwright Václav Havel, defender of the hegemonic objectives of the U.S. government, addressed the citizens of Prague, capital of what was at that time Czechoslovakia.

Garcia’s real objectives are also evidenced by his actions on the night of November 26 last year, as reported on Razones de Cuba. Prior to his presence in front of the Ministry of Culture, he posted a question on his Facebook page: «Cuba, what do we do now?» Very similar to Havel’s statement: «Something must be done,» during the Prague protests. It was on that November 27 when Garcia appeared as an agent of change, a role rehearsed by the U.S. in the Color Revolutions, a strategy of silent intervention used by U.S. imperialism to overthrow governments that do not share its economic, social and political vision. Dr. Vázquez added that what is being sought is to provoke chaos and civil disobedience, setting the stage for international organizations to sanction Cuba, followed by calls for military intervention and the imposition of an alternative government in our country.

There can be no doubt. The denial of permits for the November 15 marches by Cuban authorities is based on the fact that they are part and parcel of a regime change strategy financed by the U.S. government.

More proof is provided by the support quickly offered by U.S. legislators and figures in the Miami anti-Cuban mafia, among them Ramon Saul Sanchez Rizo, a terrorist of Cuban origin and current president of the Democracy Movement, who supports the actions of the Miami extreme right and maintains regular communication with Yunior Garcia.

Garcia fervently denies any relationship with subversive organizations or agencies financed by the U.S. government, which is clearly contradicted by the fact that, since 2017, he has been identified with the Carnegie Endowment for International Peace, an agency led until very recently by the current director of the U.S. Central Intelligence Agency (CIA).

Likewise, in a statement to teleSUR last October 12, he acknowledged his relationship with the charge d’affaires of the U.S. embassy in Havana, although he omitted his ties with Alexander Agustine Marceil, Cuban Affairs official at the State Department, who maintains close ties with internal counterrevolutionaries.

Other extreme right wing figures such as Marco Rubio, María Elvira Salazar and Orlando Gutiérrez Boronat have expressed their support for the marches.

On the other hand, Juan Gonzalez, President Joe Biden’s principal advisor for Latin America, reported that the administration will take measures against Cuba if authorities prosecute coordinators of the November 15 actions, an assertion that once again confirms the U.S. government’s relations with the promoters of this latest destabilization attempt.

Members of the Archipelago project, which has announced the marches, insist that they are simply demanding respect for the rights of Cubans, the release of political prisoners and that differences be resolved by democratic, peaceful means.

«They are allegedly calling for a peaceful march, but he knows,” Dr. Vázquez stated, referring to Garcia, “that this is not so, because in the paramilitary workshop we attended there were two generals. What Yunior García Aguilera is looking for is a confrontation between the Revolutionary Armed Forces and the people, and we will not allow that,» he reiterated.

«I am informing myself with people like Omar López, who are advising us on peaceful resistance, nonviolent struggle,» González explained. Omar López is the CANF human rights director, protector of terrorists Luis Posada Carriles and Orlando Bosh Ávila, who organized the bombing of a Cuban airliner over Barbados, which took the lives of 73 people (including 57 Cubans).

López was also one of the right wing figures who met with the U.S. Secretary of Homeland Security in August, demanding more aggressive action against Cuba.

The Argentine Gabriel Salvia, director of the Center for the Opening and Development of Latin America (Cadal), a NED subcontractor, recently called for international support for the November 15 marches. He maintains links with protagonists of the internal counterrevolution, including Manuel Cuesta Morúa.

Yunior García Aguilera’s career, Dr. Vázquez noted, began at Saint Louis University, where he openly stated that upon his arrival in Cuba he was going to devote himself to the counterrevolution.

«I am here making this public statement to the people of Cuba, so that they will not be fooled by leaders created by manuals, so that Cuba never faces an intervention by the great enemy of the North,» Dr. Carlos Leonardo Vázquez González said.

He is not only a State Security agent, but also a physician, a MSc specialist in General Comprehensive Medicine and Oncology. And as he himself insisted, a Cuban revolutionary, always loyal to the ideas of Martí and Fidel.

The November 15 marches – as he made clear – do not constitute a genuine expression of the people’s interests, just as Yunior García Aguilera does not represent Cuban intellectuals or artists. Both represent one more variable in the old equation that the U.S. government and its internal political agents attempt to apply in Cuba, and fail.