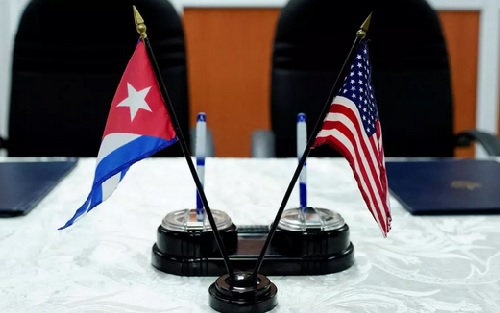 Cuba- The U.S. House of Representatives has approved a bill supporting the violent counterrevolutionary actions that took place in Cuba July 11. The initiative will now be considered by the Senate, and if approved, will be sent to the President for his signature, to become law at that point.

Cuban Foreign Minister Bruno Rodríguez Parrilla tweeted a comment on the move, stating, “It is clearly hypocritical that the United States does not tolerate interference in its internal affairs, but at the same time finances and promotes destabilization mean to subvert the constitutional order in Cuba.”

The bill was sponsored by Democratic legislator Debbie Wasserman-Schultz, and received the support of Republican Mario Diaz-Balart, both representatives from Florida.

Pushed by the most retrograde sectors of anti-Cuban politics, this latest interventionist skirmish mounted by mercenary political operators is meant to promote destabilization. But, their hopes of creating a perfect storm – combining the brutal blockade, reinforced with 243 measures imposed by Donald Trump and maintained by Biden and the multidimensional impact of COVID-19 – did not lead to the longed-for collapse of the revolutionary government.

July 11 was a victory of the revolutionary people, the plans of imperialism were defeated in the very streets they sought to fill with chaos and death.

The country did not come to a halt. Mass starvation, collapse of the health system, death and chaos did not occur. Cuba created its own vaccines and medicines, tightened its belt and distributed the loaves and fishes for all. Our health workers saved lives and the country is reborn today, proud of its scientists, inaugurating new factories, passing laws, changing everything that needs to be changed.

Washington threatens, threatens new coercive measures, creates laws that purport to sustain the (in)morality of its mercenaries; while Cuba remains true to its history: peaceful in work and friendship, but unwavering in honor, with our horses saddled and ready for battle.

We have a homeland and we defend life! And remain committed to Homeland or Death!