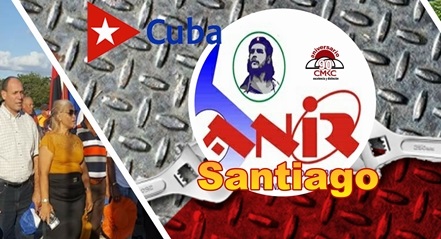 ANIR Santiago – The Innovators’ League (ANIR in Spanish) is an organization to promote and guide the creative initiative of Cuban workers in the search for solutions to important economic and social problems and for the defense of the country.

It is a social, voluntary and selective organization where its members approve their own regulations, discuss and reach agreements, periodically elect their leaders and agree on their directives under the principles of centralism and union democracy. It is sponsored by the Cuban Workers Federation (CTC) and is governed by its bylaws.

The ANIR has its antecedents closely linked to the revolutionary triumph, when the workers with their decisive creative activity guaranteed the vitality of the economy in the face of the exodus of skilled technicians and the shortage of spare parts, resulting from the actions of Yankee imperialism to stifle the nascent Revolution.

The ideas of the Captain of the Working Class Lázaro Peña and Commander Ernesto Che Guevara, who was declared Honorary President in the Constitutive Conference on October 8, 1976, played a decisive role in the creation and development of the League. It was the result of an agreement of the historic CTC 13th Congress: to have those talented workers in an organization to significantly support economy and defense.

ANIR is the Cuban organization that groups, organizes, mobilizes and stimulates innovators and rationalizers and represents them inside and outside the country. It has its own logo for identification and public representation.

Celebrations for the Innovator’s Day

The ANIR National Board has its headquarters on the 4th floor of the building of the Cuban Workers Federation in Havana, Cuba.

ANIR contributes with its operation together with the unions and the contribution of its innovators to the development of any economic activity of production, services or defense that demands the intelligence, creativity, dedication, commitment and response of these workers.

1. To fully develop the creative initiative of the workers, in such a way that it favors the development of innovations, rationalizations or solutions based on the saving of resources of all kinds, the recovery and manufacture of equipment, machinery and spare parts and the maintenance of existing technologies in such a way that they allow the increase of production, the productivity of work, the substitution of imports and the best productive practices.

2. Organize innovators and rationalizers with the active participation of the union in those labor collectives with conditions to do so.

3. To incessantly disseminate the efforts made by innovators and rationalizers in order to favor the generalization of their results and that they be recognized and stimulated in due time for their work.

Annually the ANIR National Bureau at the proposal of the municipal and provincial organizations, after agreement with the corresponding unions, awards the «October 8 Seal» to the innovators who deserve it for their career, merits achieved and their exemplary attitude with the principles of the Revolution.

Annually, the ANIR Bureau grants the Innovator Award for the results of greater Economic and/or Social Impact, at the proposal of the Unions and ANIR, together with the administrative entities at different levels.

Each Provincial Bureau, together with the unions, will select annually the proposal of the Outstanding Inspector for the work developed in the control and checking of the objectives of the association.

Other ways of stimulation are the development of the EXPOANIR, the Meetings of Women Creators, the contests, the participation in technical events related to the innovative activity, as well as others that are organized in the entities.